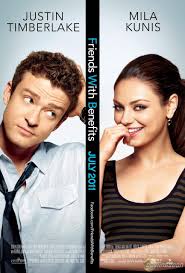 I had the pleasure of chatting with the director of new romantic comedy ‘Friends with Benefits’ Will Gluck, as part of my weekly radio show.

Will previously directed the 2010 movie ‘Easy A.’ and has a list of comedy writing credits in the US.

He was brilliant and funny and was a great sport while taking part in our 80’s movie knowledge quiz ‘Easy Eighties.’

Will describes ‘Friends with Benefits’ as,

“It’s a movie with Justin Timberlake and Mila Kunis in which they are naked a lot , its very funny, it’s a moive about what would happen if you could tell your partner in bed everything you wanted to tell them about how well or not well they’re doing.”

Justin and Mila have both stared in Oscar winning movies in 2010, The Social Network and Black Swan, but they are also both known for their comedic talents. Will was 100% involved in the casting process,

Both ‘Easy A’ and ‘Friends with Benefits’ make a social comment on modern society, did Will think that this was necessary to make a successful comedy?

So who should go and see ‘Friends with Benefits’? Will thinks it’s a great date movie,

“It’s the type of movie that both guys and women will both love and it’s very very funny and very real, and not like any other romantic comedy, more of a comedy with romance. Guys don’t be afraid to go see this movie.”

If you are still not convinced to go and see the film Will concluded that,

“If you see this movie there is great chance you will go home and have relations.”

Friends with Benefits is on general release form 9th September and it’s definitely not your traditional rom com!

To listen to the full interview go to http://soundcloud.com/user9359453