Its time to face the music… the phone lines are now closed… and the winner is…..

This is familiar talent show fodder that we hear coming from our TV’s most Saturdays. But why has the TV talent industry become so prolific; covering singing, dancing, comedy and musical theatre. Do we now have a generation of people wanting ‘instant fame’ instead of slogging it out to hone their craft? What kind of vehicle does it provide for artists and what freedom of development do they really have when tied to a contract from a talent show?

The new revival of TV talent shows include Popstars,Pop Idol,The X Factor, Fame Academy, How Do You Solve a Problem Like Maria? The Voice and Britain’s Got Talent. These shows have thrust the likes of Susan Boyle, Will Young, Flawless and Leona Lewis in to the limelight. However the creators of such shows are millionaires and in some cases have become the stars themselves ah hem Simon Cowell!

However this is not a new phenomenon, TV talent shows have been around for decades; Opportunity Knocks, New Faces, Search for a Star and Stars in Their Eyes introduced us to (to name a few)  Lenny Henry, Victoria Wood and Les Dawson.

Some may think it cynical to say but there does seem to be something new going on today that seems more sinister, more contrived and crueler than the shows gone by. Maybe shows like Stars in Their Eyes were gateway talent shows to the class A stuff! If you are watching the current series of the X Factor it does seem to have turned in to the monster big brother of its predecessors. The judges are now superstars. What will Tulisa and Kelly be wearing? Isn’t Gary Barlow handsome? Will this next act remind Louis of a young Westlife? Emotional back stories, returning contestants failing once again, weeping judges, weeping contestants and weeping audience members. This is our Saturday night entertainment?

That’s why I am looking at The Good The Bad and The Ugly of.. the TV Talent industry talking to some talented artists who have and have not taken part in the recent TV talent surge.

The exposure and experience of working with the pressures of a TV show can test your professionalism and aid your commercial career. James Fogerty is part of UK B-Boy Crew Trinity Warriors, from Derby, who were finalists on Sky 1’s Got to Dance in 2010

James told me about what led Trinity Warriors to the TV talent world,

“We entered Britain’s Got Talent.. some of the other members where really interested in doing TV, we felt it would boost our commercial career.. we didn’t get very far..we got to the live TV round but then got cancelled so Got to Dance was the first one we did well in. It was a lot of fun…We were treated very professionally…it was really amazing, a great experience.

He commented on the impact the show had on them,

“Commercially we obviously got a huge boost because we had a name, a reputation through being on TV. If the media takes more notice of you, you become more sellable. We were trending on Twitter through the semi-final and our facebook became more popular and our website…commercially we became more viable. Through traditional Breakdance we didn’t actually become any better except for the fact we had worked more on choreography. If anything..we learnt how to work hard  There could have easily been downsides like if we hadn’t of treated it well ..or if we had been more cut up about losing in the final..I think we became a stronger group.”

When asked if he would recommend the process he said,

“Yes especially dancing…. It does you a lot of favours and teaches you about the commercial world, it teaches you about professionalism and how the media is going to treat you which is quite surprising, it’s not how people would expect…It’s a great experience as long as you don’t take it to heart if you’re not everyone’s cup of tea.

“(on TV) its not about giving one big performance, you have to consistently give a good performance. Also TV thrives on the drama and emotion…we did so many interviews over the show..to get a reaction for tv.”

She found that it to be positive experience overall.

“I found it absolutely fine…everyone was really lovely”

“You go in front of, I presume it’s the  producers, there was basically one guy….a big room and a big space…it was quite funny doing burlesque in front of just one person.”

She went on to feature on the TV audition show and got through to the next round. As a result of appearing on the show she said,

“more people know who I am which was the point of going on there basically..I thought within the burlesque community that it might be frowned upon ‘cause it is quite a cheesy thing to do..but I’ve not had a problem at all.”

The producers want good TV and want to find an angle for your ‘story’. Is there a risk of being known as a ‘loser’ if you don’t succeed?

“We were in control with what image was put across, but that was only because we were very particular

They would ask the same thing in slightly different ways but I would give exactly the same answer..they are professional and used to interviewing to find out juicy information..they wanna hear what makes good TV…they like sob stories”

The Trinity Warriors has also previously entered Britain’s Got Talent and were put through only to be later cancelled by the show’s producer and their successful audition edited out of the programme?

Jeanie Barton is a Jazz singer, originally from Nottingham but now based in London, Jeanie gigs regularly around the UK with her quartet Her recent credit’s include performances at The Jazz Cafe, Ronnie Scott’s and The National Theatre, as well as a cruise on the Seine in Paris and support for Georgie Fame.

So Would she consider TV Talent Shows to progress her career?

“I haven’t been interested… I think it can work for you,  obviously if you do do very well, but can work against you if you don’t go on to win… you are known as a loser. I have also always been somewhat suspicious of the machinery of the business side of what the process… I have never really thought of it as a quick fix for a career.”

Jeanie commented on what she had heard regarding contracts involved in the shows and that people had “..dropped out late in the process” a they did not like the paperwork they were asked to sign.

When I asked Talulah Blue if she felt any negative effects of having taken part in Britain’s got talent she said,

“not for me personally but I’m pretty fearless and I’m doing burlesque for fun and  if at any point I don’t enjoy something I won’t do it.”

Could there be a risk in appearing on these TV talent shows?

“there’s a risk for every single person that ever goes on TV because its so easy to become a celebrity these days and once you’re out there the newspapers can do anything to you so I’m kinda glad I didn’t go boom straight up to massive success I’ve just taken a step up and I think that’s the healthy thing to do.”

Talulah did receive quite a bit of Tabloid attention

“I didn’t have any control over it but now people outside of Leicester know who I am so that’s good.”

Surprisingly this does not seem to be a format that is really suited to newbies; the experiences of the likes of Susan Boyle show the pressures causing possible harm to someone unprepared for the commitments, exposure and demands of being thrust in to the lime light. Most newcomers accept the process of slogging it out to gain the skills and professionalism to achieve success.

Kirsty created her own show ‘Dirty Word’ which she took to Edinburgh Comedy Festival this summer.

As a new comedian would she take park in a TV Talent show?

“I personally wouldn’t at the moment… I’m just doing it the traditional way really of gigging as much as I can really.”

But her local talent show experience was positive

“It was great…its strange when you add the element of competition ..it adds another layer of pressure but on that occasion the gig was really friendly… There’s other ones were you get voted off if you’re not funny but this one was more focused on everybody having a good time and the audience wrote down who they wanted to win…nobody was booed off the stage or anything like that..it was a good experience.”

It seems a myth that you will be plucked from obscurity to instant fame, you must have laid the foundations of craft in order to take that step to TV Talent World.

Talulah Blue agreed that a certain amount of experience and maturity was needed to take part in something with such high exposure,

“if you’re not going to take the experience personally and its not going to break your heart you need to take everything with a pinch of salt do it for a bit of fun and take it on the chin if it doesn’t go well….you need to be a strong person, if it was some fragile little 16 year old and they felt like there life depended on that performance and it would break them if they got bad feedback then no you if you’re too fragile don’t do it.”

“I think the fame that people are after these days is not really on the basis of respect for their skills … its more ‘I just want to be on telly’..there’s no foundation to the building, its not going to stand up for long.”

The question has to be are we watching these shows for the successes or the failures. Some finalist in Britain’s Got Talent this year would have been unimaginable acts at The Royal Variety Performance.

“It was a dream come true and the song was about a dream not coming true and it made everyone cry and be happy for her… but there’s something of the Barnum and Bailey about it all as well, it’s more freak show than talent show…its kind of cruel at the same time.”

“[Susan Boyle] was such a massive phenomenon after singing that one song so poignantly.. . That was in my opinion a bit of a one trick pony and because she didn’t have professional experience and how to deal with that kind of hard work and the way the industry can be ..she has had successes but I think its hard to keep up that kind of consistency in performance for someone who is not experienced” 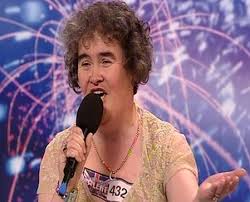 It seems that in today’s entertainment industry there is a place or maybe even a need for the kind of instant exposure, and those who have had success certainly aren’t complaining.

“…they wanna hear what makes good TV…they like sob stories”

And it doesn’t seem that unprepared entertainers will be able to perform consistently or have the longevity to their career.

“..in some ways it’s a good thing. It’s, Opportunity Knocks again but it’s not the dream come true I’m certain of that.”