As a last minute addition to my itinerary last night I popped in to The Classic to see Craig Campbell, a Canadian comedian who I had not seen before but whose poster won me over. 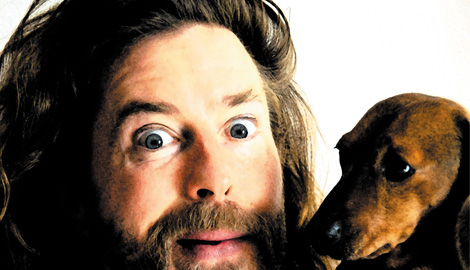 It was a quiet Monday crowd and one that I am not entirely sure fully appreciated the  genius story telling capabilities of Craig Campbell.

I found him totally engaging, clever, sometimes quite unexpectedly shouty, but overall very funny. He had a great ability to sound improvised and to interact with, and include his audience. Having not seen him before I am not sure how much of the show was improvised but it certainly had that feel. It strikes me that he will adapt and meander around the interaction and commentary he gets from his audience.

He is a Canadian and proud but has many stories from around the world with humorous observations from his experiences in the Netherlands, UK, Norway as well as his homeland.

He is exactly the kind of stand –up I love and could listen to him for hours. He has similarities to his countryman Tony Law, as they both tell long tales with huge expressive movements and tone to get you to giggle.

Craig is able to delve in to his own life and travel experiences and link them together to form an hour of hilarious and varied antidotes including character voices as well as social commentary. It is the breed of comedy I admire so much and it’s no surprise he has been compared to Billy Connolly.

I believe his show will evolve during the week and no night will be the same, he is definitely one of my picks and I am so glad his poster caught my eye.

Craig Campbell is performing at The Classic, Auckland until the 12 May, part of the NZ International Comedy Festival.