Dead Cat Bounce is a three piece band from Ireland, but don’t expect classic covers at this show. Dressed the part and proving their rock credentials, the 3 guys wore gold skinny jeans, glittery leggings and leather trousers, much to the delight of the female front row!

This comedy rock trio gave us an hour of excellently executed songs including one about a Homophobic Penguin performed in the style of Johnny Cash, while bass player Shane O’Brien sung about his penchant for a Really Tall Woman. Every rock band has a huge international hit and they played theirs, the crowd pleasing Youtube hit ‘Rugby’. 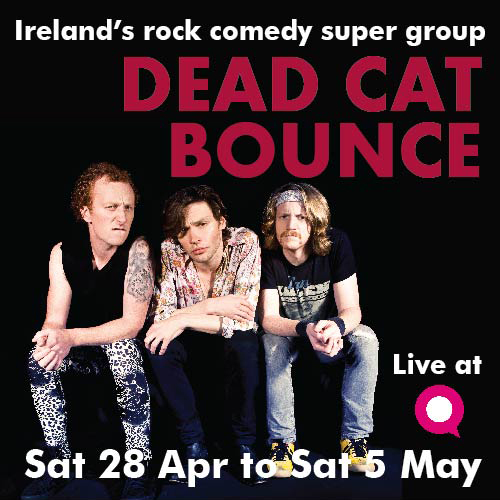 Admittedly this show may not be everyone’s cup of tea but it’s a fun gig and a refreshing change from traditional stand-up.

They are amazing musicians with some clever lyrics, but make sure you pay attention as you may miss some classic lines if you don’t.

Aside from the songs you get to learn a bit about the band too. They have supported The Darkness and their lead singer, James Walmsley, has been on a quest to find his father who he believes to be Whitesnake front man David Coverdale !

Expect to see your first ever comedy drum solo from Damo Fox, as well as other impressive musical tricks too! The band shamelessly plug their merchandise in their final song ‘Lets Make Love’ then  briefly leave the stage before returning for their ‘planned’ encore.

If you still want more you can purchase your Dead Cat Bounce CD after the show!

You can catch Dead Cat Bounce at The Loft @Q every night until  5 May.