The Q Theatre’s Rangatira stage looked filled with copious amounts of props while, through the load speakers, the voice of Chris Cox gave us our first instructions of the evening.

As I sat front row with my boyfriend I waited for others to join us but it seemed everyone felt safer one row back!

Turns out at Fatal Distraction it doesn’t really matter where you sit at this interactive show. 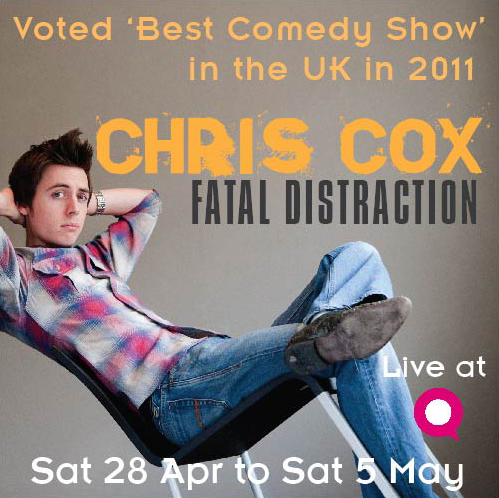 Chris burst on stage with enormous energy and announces that he is a mind reader who can’t read minds. This should be interesting!

His pace is fast and he moves around the stage in a manic gazelle like fashion hopping from spot to spot. It’s all very distracting in a charming way, but I guess that’s the point.

The hour show features lots of twists and turns through the narrative of a love story. Some mind trickery is revealed early on while others are left long enough for you to forget all about them until the end of the show.

Chris interacts effortlessly with his crowd and makes everyone feel at ease as he works around the audience and welcomes some lucky folk on to his stage.

This is a variety performance with one liners, visual jokes, audience participation and good old fashion magic and mentalism!

Chris is a truly talented individual who even informs us at the start of his show that his witty chit chat, magic, psychology, body language, influencing, devilish good looks… and lying will make us think he knows what we’re thinking. Even though he doesn’t, or does he? See I am confused again! I did get my chance to be in the show and earn my self my very own Mind Reader badge as did TV3’s David Farrier, so you really never know who will end up part of this sorcery.

After the show I went to the ladies and overheard a conversation between two women who were just desperately trying to work out how he had done it.

That’s the gift of Chris Cox’s Fatal Distraction, it keeps you guessing long after it’s finished and may just make you believe in magic!