Ben Hurley presented a night of new talent from New Zealand last night at the Loft at Q Theatre. 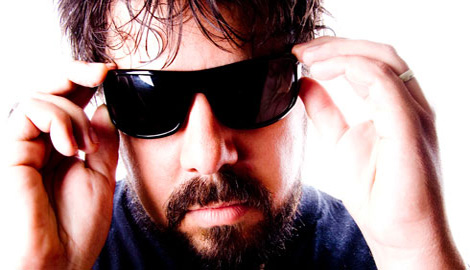 Unfortunately the room was not full but those of us that were there were up for a laugh, and for supporting up and coming comedy.

Ben Hurley is a seasoned performer so he is at ease both on the stage, and with chatting to the audience, which included a chat with with me! After a short warm up he introduced the first new act of the night.

There were four comedians on, the first of which was Sanjay Patel whose dead pan delivery had everyone giggling. Unfortunately as a newbie to NZ I missed some of the pop culture references but I enjoyed his on stage persona and slightly surreal subject matter. Sanjay has a show at the festival called At Last The 2011 Show on until 5 May at Brooklyn Bar. Next up was the youngest comedian I think I have ever seen, just turned 18 Lewis Dean was confident and had some good material and stage demeanour. I am sure he will go from stretch to strength and get over the stigma of being a comedian who likes Hamilton.

Following Lewis was Pax, a naturally comedic  person who used his body movements and physicalities in his act to make us laugh which included some tips on how to get out of a fight by looking a bit ‘rapey’.

Finally Guy Williams, our last comedian, was on stage. He worked his slightly geeky image well and was my favourite of the night. I found him to be clever and original mixing excellently delivered jokes with more random visual ones. He is confident on stage and of his material, which came effortlessly from his lacklustre attempt at audience interaction, comments on moving to Auckland and understanding the global financial crises through the extortionate price of cheese. I definitely wanted to see more from him.

Luckily for me, and everyone else, Guy also has his own show at the festival called On the Verge of Nothing 14 – 19 May at The Classic.

Ben Hurley will be presenting another New Faces on Sat 5 May and will also be performing in a show with 7 Days co-star Steve Wrigley – Live & Unleashed 15 – 19 May at Q Theatre.

This show was part of the NZ International Comedy Festival.