Last night a packed Comedy Chamber witnessed the last but one of The Axis of Awesome’s show in Auckland.

I have heard and read a lot about this comedy rock trio during the first week of the festival but have avoided youtubing so as not to spoil the surprise, and I knew enough to know they sounded rocking. 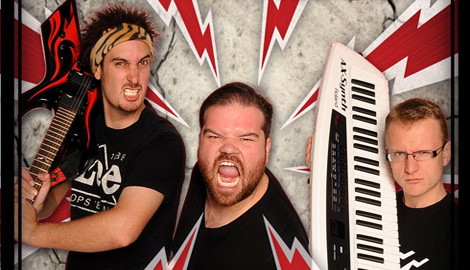 My expectations were met, and some as they were, well awesome.

The group came on to the stage apologising for the lack of pyrotechnics, lights and animatronic dinosaurs and began thier hour set of comedic songs and clever musical comedy.

They are phenomenal musicians and applause comes as much for their musical prowess as their comedy.  Their banter is sharp, sometimes within songs and  sometimes in between, but always hilarious. Their keyboardist takes the brunt of the on stage ribbing due to him being a little shorter than the others.

The show makes fun of all our favourite pop and rock clichés expertly imitating styles and well known songs. Probably their most famous song is the Youtube hit ‘4 Chords’ which gets a huge reaction from the crowd.

This show was great fun and they are definitely at the top of their game in this genre of entertainment, it’s no surprise they have had such huge worldwide success.

I would happily have watched the whole show again so it’s a good thing you can buy a CD after the show, something to play in the car on the way home ;).

The Axis Of Awesome play their final show Sat 5 May!