Marcel Lucont has had such a succesful run at this years NZ International Comedy Festival that he added an extra show for his Auckland fans yesterday afternoon.

I had not had the chance to watch him so far this week so was eagerly anticipating  this much talked about show.

He is as cool and laid back as his poster suggests while he enters stage with that je ne sais quoi that you should expect when a man is walking on his very own red carpet! 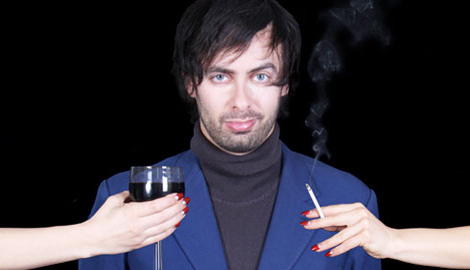 Glass of red wine in hand he began his hour show of low energy sharp wit, fantastically scribed sex poetry and of course his 50 ways to leave your lover. He also treated us to a song or two.

He holds his dead pan delivery throughout making his arrogance, and of course his superiority to us known and understood. I wouldn’t have him any other way.

He really is a pleasure to watch as he cleverly plays his quirky observations in his refreshing style of such obvious disdain that he will have you in fits of giggles.

Alas the Frenchman’s time in Auckland is over for this year but we hope it is only adieu until next years festival as I definitely want an encore!

You can also get more from Marcel in his book “What We French Think Of You British (And Where You Are Going Wrong)”  which you can buy here.