Terry Alderton is back in New Zealand with his new show You’ll Be Glad to See the Back of Him at the Q Theatre in Auckland this week.

While leaving the theatre, following last nights opening night of this unique UK act, my boyfriend said, ‘I can’t wait to read your review of that!’

This is not to say we didn’t like it, we loved it! It was just that he is so totally insane that we found it difficult to describe his show. 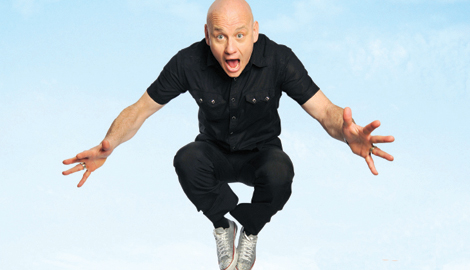 I wasn’t surprised to learn that Terry had an acting background as his phsycalities and charactisations are spot on. I believe he is the most theatrical comedian I have ever seen on stage (with the exception of Lee Evens; a comparison and indeed impersonation Terry makes himself, and who Kiwi readers may not be aware of so you will just have to trust me on this one).

This show is random and surreal, a sort of planned bedlam with huge Shakespearean expressions and movements. There’s music, sound effects, songs, dancing and many many characters.

I say characters but really I mean personalties as after a while you are not sure who Terry actually is, which I guess is the point. During the show he switches around voices, sound effects and even appendages amongst his seemingly Gollumesq turmoil.

Sometimes you are not sure if you should laugh or not but if you stick with it you definitely should. If you are one of the lucky few to get Terry’s attention during the show you too will be pulled into his crazy world and it won’t be a show you forget easily!

His talent for voices and sound effects is astonishing and the pace and speed of his delivery was almost exhausting, but exciting to watch. I admired his ability to deliver subtle jokes around all the madness and to ressurect references from earlier on in the show.

Terry is a comedian that encompasses so much talent and variety in his performance its no surprise he battles with which version of himself to perform as!

Check out Terry Alderton at Q Theatre until 12 May.