Rhys Darby’s This Way to Spaceship started its five night run to a sold out SKYCITY Theatre last night.

His new stand-up show is in conjunction with his first book conveniently also named  This Way to Spaceship, a handy autobiographical end of world companion where you can hear how NZ’s biggest stand-up comic went from meek geek to king of cool. 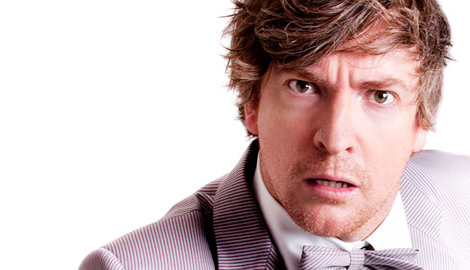 There was a buzz in the air as we took our seats, I had seen Rhys live in Edinburgh in 2009 but was so excited to see him again and this time in his home country!

As a warm up to the main event the start of the show began with our briefing and announcements by Rhys as ranger Bill Napier. I love this guy as he has a sort of silly innocence about him and was a great teaser for what was to come.

Bill then introduced the support act for the evening Steve Hughes. I had seen the posters of Steve around Auckland for his show Heavy Metal Comedy, and I was attending his show the next day so I was eager to watch him and find out what I was in for. I was not at all disappointed as this UK based, Australian raised comic was hilarious. He worked a possibly hesitant crowd of Rhys fans to win them over and have us all is fits of laughter.

He was a great warm up to the main event and definitely made me excited about his show. He was intelligent and sharp and his social commentary around sport, homophobia and the feminisation of men was one of the funniest routines I’ve ever heard!

There was then an interval which I feel knocked the momentum out a bit as I just wanted to carry on laughing, but it wasn’t long before the show started.

Performing to a backdrop of the initials RD with a lightning bolt through, the spaceship lights and noises began and Rhys was on stage.

As we approach the end of the Mayan calendar in the year 2012 and thus the end of the World, Rhys looks back at how he got where he is and became who he is through various anecdotal comedy routines.

He used his vast stage space, running and leaping around with boundless energy, to bring his stories to life while using his scenes in the ‘spaceship’ as a base around his narratives.

Particular favourites and highlights of mine included the best Dressage based comedy miming of all time, the trials and tribulations of modern bathroom appliances, the differences in men and women’s searching techniques and some quite dazzling and admirable dance moves.

There were fewer sound effects than the last time I watched him and he performs the whole show as himself and not as various characters. I adored his anecdotal style which was able to take the simple act of greeting someone and make it into a farcical stage romp! I was so pleased to be able to meet Rhys after the show and get my copy of This Way to Spaceship signed!

My only criticism of the show was that some of the spot lights were right in my eyes on a few occasions. I am hoping that this was noticed as I was not the only one shielding my eyes from the beams.

Rhys Darby has had huge success around the world on TV, film and as a stand –up so it’s a real pleasure to have this Kiwi comic back on stage in New Zealand. The warmth of the audience towards him proved how likable and loved he is.

This is a sold out show so I don’t need to sell it to you but I can tell everyone seeing it that they won’t be disappointed by this excellent show which leaves you knowing a little bit more about one of New Zealand’s national treasures!