I had been looking forward to Anil Desai’s Night At The Movies ever since I first saw the NZ International Comedy Festival programme.

I am a huge movie fan and a huge live comedy fan so the idea of combining them both seemed genius to me.

Anil’s hour show is great for a movie fan as you will not only recognise the actors he impersonates but the classic movie lines he quotes too.

Anil’s love of cinema began at the age of six and has culminated in his adult life into this amazing talent of impersonating some of our favourite movie stars. 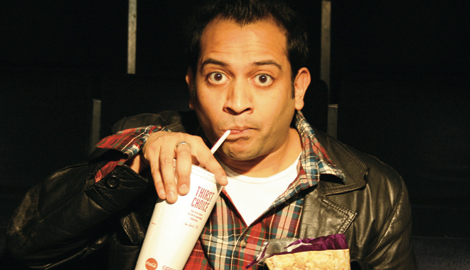 His impersonations are spot on, add to that the ability to switch seamlessly between them within anecdotal stand-up and you get this unique and entertaining show.

I loved his movie trailers which starred three of the heavy hitters of cinema; Tom Cruise, Johnny Depp and Keanu Reeves, all expertly imitated and caricatured.

The audience can get involved too, which was to the particular joy of one young man in the crowd who couldn’t wait to jump on stage with Anil, having seen his show at last year’s festival.

Anil banters with the audience a few times during the show but talks of his ineptitude at dealing with hecklers, so it is in his impersonations where he truly shines.

One of the highlights had to be when Al Pacino and Robert De Niro both get involved in Anil’s personal life, along with a shorter Jeff Goldblum of course!

You will be surprised at how many perfect impersonations Anil can portray and indeed how many famous voices you instantly recognise.

Anil’s hours of movie watching have paid off, as only a true fan could create such brilliant impersonations and even dissect them simply so that you can have a go too. Here I am with Anil trying to learn the Robert De Niro face!

Anil really loves what he does. His talent, abilities and comedic instincts have made him a deserving international success.

You can see Anil Desai’s Night At The Movies until 12 May at The Loft at Q, Auckland as part of the NZ International Comedy Festival.