At 10pm last night I went back up to the Loft at Q Theatre, which is becoming a bit of a second home for me these last few weeks, to watch some Heavy Metal Comedy from Steve Hughes.

I had seen Steve support Rhys Darby the previous night at SKYCITY Theatre where this UK based, Australian comic was completely hilarious. He worked a possibly hesitant crowd of Rhys fans to win them over and have us all is fits of laughter.

He was a great warm up to the main event and definitely made me excited about this show.

The title is not to say there is Heavy Metal during the show but it is a reference to Steve’s previous career as a Heavy Metal drummer.

He is perfectly at home on stage telling us, ‘Don’t worry I have been doing this for 15 years I’m funny as Fuck!’ 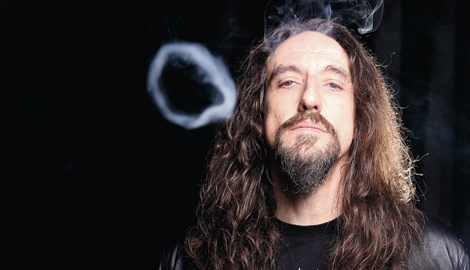 He is refreshing in his stance to avoid the PC, health and safety madness that surrounds us and uses himself as a reminder that simple common sense used to keep us alive!

Steve mocks the ridiculous laws and precautions the modern world inflicts upon us. He  talks extensively, philosophically and intelligently of the western world’s foreign policy, the War on Terror and the paradox of the illegalisation of naturally occurring drugs when pharmaceutical ones are so readily available. Some brilliant observational drug anecdotes accompany this!

A chunk of his material revolves around his self-inflicted exile form Australia, a place he feels for many reasons did not suit him. This topic produces some of his most colourful material both in language and laughter. His social commentary around sport, homophobia and the feminisation of men was one of the funniest routines I’ve ever heard!

On a serious note I really admire comedians who are able to cover this kind of variation of topics, which in many situations may be hard to find the funny side, but yet he always does.

He obviously has a supremely intelligent comic mind with the ability to weave in the most unexpected of topics and still make you laugh.

Steve Hughes will impress you with his comedy and I highly recommend Heavy Metal Comedy. Auckland are lucky to be able to see this world class comedian in such an intimate venue. This provocative and hilarious show may leave you looking at the world around you slightly differently.