Oh the joy of this man!

Just the sight of Barry Morgan’s poster made me chuckle so I thought that the show couldn’t fail to induce further burst of laughter.

From the minute he was on stage I just smiled and laughed. Dressed in a safari style suit with the biggest and best hair I have seen at this festival he camply addressed us,

“G’day shoppers and welcome to Barry Morgan’s World of Organs!” 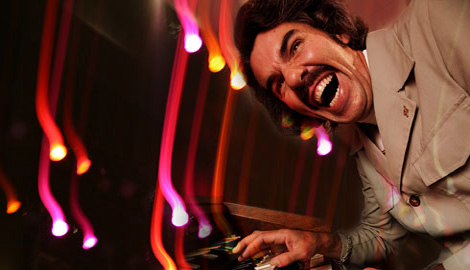 All the way from Adelaide’s Sunnyside Mall, Barry was here to show us all the joys of his organ, smiling ferociously throughout.

For the next hour we were given the most extensive demonstration of the 1981 Hammond Aurora Classic, during which time Barry also told us of his upbringing, used some first class organ based innuendo, had costume changes and still managed to chill out with a few sips of Campari.

You may think that just listening to the organ may get tiresome? Don’t worry as we were treated to a birds-eye view from organ cam, showing Barry’s fleeting fingers tinkering away while he played. There was even a pedal cam to catch those fast feet too! That’s not all! He used the camera close up to hilarious effect to give messages from his sponsors, proving him to have the best teeth in the business! Barry Morgan had his shoppers clapping, singing and waving along to his demonstration and I must admit that I really lost the plot during this show, watching parts of it through tears of laughter.

We were teased with the chance to be one of the few lucky shoppers to learn Barry’s  One Finger Method. The fortunate trio selected by Barry were rewarded with not only the honour of touching his organ, but with their own certificate too.

Barry Morgan ‘s performance leaves neither his musical prowess nor comedic genius in question. There is the perfect balance of music and laughter.

This show is a superbly silly symphony of organtastic double entendre and the sweet sweet sounds of the Hammond Aurora Classic! Barry Morgan’s World of Organs may well be the best piece of organ based comedy in the World!

Check him out at the Q Theatre until 12 May as part of the NZ International Comedy Festival.