This UK namesake of the lead singer of one of the world’s most famous bands is in Auckland performing his show Chris Martin No. Not That One.

Chris is energetic from the offset, keeping a great pace throughout the show. He is upbeat yet self-deprecating with a youthful enthusiasm which lets you know he loves what he does.

This show focuses on our judgements of both ourselves, and of those around us. Throw in Chris’s neurosis of being alone, immature, thinking too much and being easily distracted and we have the show! 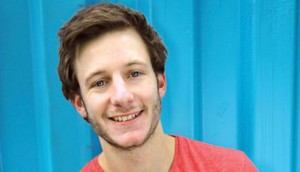 He draws on anecdotes from his own life as well as from his friends and family, his father gaining a starring role. Who would have thought a food diary could be both a literary and comedy masterpiece!

Chris takes us on a journey through various silliness and childish escapades that encompass his life including; inter-species prank playing, unnecessary lying, grown men in theme parks and why you should never text and drive.

His interactions with the audience are fun and inoffensive creating a relaxed environment of ‘we’re all friends here.’

Chris accuses himself of being easily distracted but in a comedy show I think this is a good thing and I think his distractions work well. I enjoy him jumping around topics and I even think he could do more of it!

Chris is not ready to grow up, and that’s fine as this ‘Peter Pan’ comedian is funny, engaging and charming to watch and what’s so good about being grown up anyway??

Chris Martin No. Not That One is on at the Basement Studio until 12 May as part of the NZ International Comedy Festival.