During the last few weeks I have been searching for my inaugural ‘The Grid’ Comedy Award winner.

I have seen as much live comedy as I can at the NZ International Comedy Festival and feel it’s time to announce my current front runners with only a few days of shows remaining!

Below are my top shows. Click on the links to read the full reviews. 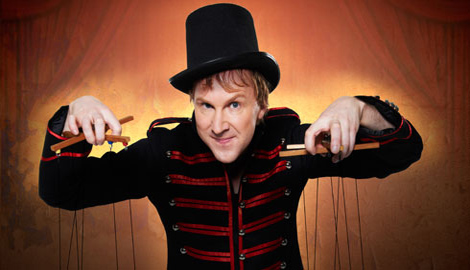 ‘He is an infectious force with provocative material and an innate ability to puppeteer his audience like no comedian I have ever seen.’ ‘He really is a pleasure to watch as he cleverly plays his quirky observations in his refreshing style of such obvious disdain that he will have you in fits of giggles.’ Rhys Darby – This Way To Spaceship

‘Rhys Darby has had huge success around the world on TV, film and as a stand –up so it’s a real pleasure to have this Kiwi comic back on stage in New Zealand. The warmth of the audience towards him proved how likable and loved he is.’ ‘He is silly and fun with a cheeky innocence and likeability. His quick wit and ability to meander around his material, seemingly plucking which ever gem he chooses is a true individual talent that must make him the envy of many performers.’ ‘He obviously has a supremely intelligent comic mind with the ability to weave in the most unexpected of topics and still make you laugh.’ Anil Desai’s Night At The Movies

‘Anil’s hours of movie watching have paid off, as only a true fan could create such brilliant impersonations and even dissect them simply so that you can have a go too.’ ‘This show is a superbly silly symphony of organtastic double entendre and the sweet sweet sounds of the Hammond Aurora Classic! Barry Morgan’s World of Organs may well be the best piece of organ based comedy in the World!’ ‘Her antidotes cover many aspects of her life many of which relate to her having inherited ‘the shit bits’ of being Croation sporning the hilarious benediction of the wax ninja!’ The Boy With Tape On His Face – More Tape

‘I am certain in the hands of this muted mastermind that every show will end as this one did, with a standing ovation!’

This shortlist is based purely on my own opinions and does not represent the views of the NZ International Comedy Festival.

I still have lots of shows to see and if you wish for your show to be reviewed by ‘The Grid’ then please do get in touch!

All quotes are from Keeping Up With The Grid! reviews.