Last night I squeezed in to The Classic Studio for a sold out performance of Gordon Southern’s show A Brief History Of History.

Dressed in jeans with a shirt and tie just like a cool teacher,  the next hour was filled with hilarious historical content crammed in around Gordon’s excellent audience participation and gold star system. 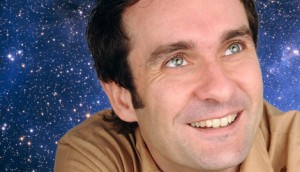 It all happens so fast! The centuries fly by as this skilled comedian fuses what is essentially a brilliant stand up show come history lesson.

Early on in his show he makes sure he has the spectrum of ages represented. He  refers to them throughout and communicates both to the youth and the older punter, sometimes making them the butt of a joke but it’s all in good  humour and full of fun.

He uses his projected pictures and sound effect box to full effect with sudden bursts of ‘that’s a fun fact’ being played out to a joyous crowd.

This is really such a fun and easy show to watch and Gordon works so hard to keep the pace at something just below mania!

Before you know it the show is over and with a head full of historical characters you will yearn for more. Thank god for Wikipedia!

This is an awe inspiring hour of historical hysteria which is a comedy festival gem!

There is one show remaining so go get your diploma in a comedy show that may well be making history itself!

The Classic Studio, Auckland at 8.45 12 May as part of the NZ International Comedy Festival