These two well known Kiwi comics are brilliant at what they do and have great confidence and command of the stage. 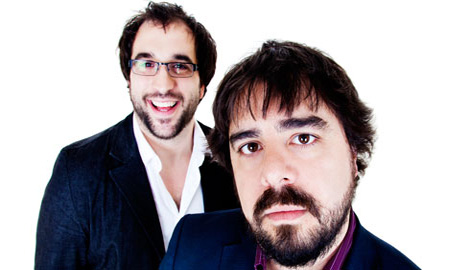 Their style is laid back with clever and witty banter. There is a strong rapport between them which makes for quick and hilarious one liners.

Ben and Steve are at home with their audience where the interaction created some great material used throughout the show.

These two bounce back and forth from one another creating eruptions of laughter throughout the room as they discuss the daily news.

This show feels much more like having a laugh with buddies than a standard stand – up show.

In the second half of the show Ben and Steve were joined by guests actor Ben Barrington and comedian Justine Smith! The guests will change every night so you will never quite know where the show will take you.

I want to describe them as the Baddiel and Skinner of NZ (if you haven’t heard of them, they are big in the UK) as they seem great mates who can improvise and discuss any topic and find the funny! They laugh and joke and they clearly share a comedy connection. It all seems very relaxed with some structured parts but mainly it just feels fabulously free and unplanned.

Having previously appeared on stage in an earlier show that night I was pleased that it was my boyfriend’s turn to be in the limelight in a great segment for the shows finale!

I am sure this show will sell out this week so get your tickets fast and enjoy this fun laid back show.