What a great show to finish on! Last Laughs did not disappoint with both the Billy T and Fred Award finalist doing their thing on stage which produced a range of fantastic performances.

Hosted by Te Radar, a full house at SKYCITY Theatre must have all had their favourites but there was no question that all the comedians were deserving winners. 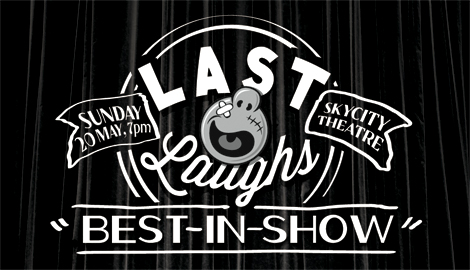 Starting with the Billy T’s, first on stage was my favourite Guy Williams, whose understated and low energy style was a hit. Second on was Tevita Manukia who summed up the similarities between threesomes and weddings! The finalists of the 2012 Billy T Award.

He was followed by the quirky Rose Matafeo who gave the audience an insight in to her mind through her lists and love of cat stickers. Next on was Tom Furness, he was a surreal comedian who wants us to bring back ‘crisp packet’ humour! Then the final Billy T nominee, TJ McDonald, gave us clever observations with some gentle ribbing of New Zealand politics.

A definite highlight of the night was the 2012 RAW Comedy Quest Winner, Jermaine Ross, who was brilliantly funny and performed some fantastically confident and smart material that proved him to be a star of the future.

Next up were the ‘big boys’, the Fred finalist Rhys Darby, Brendhan Lovegrove and The Boy With Tape On His Face. These guys could not fail to fulfil their status as consummate performers and crowd pleasers as they all received warmth, rapturous applause and laughter from the audience.  Whether you had seen, or missed out on these sold out shows it was a great final chance to catch a glimpse of their genius or to relive some of the best bits!

Following the second interval we were treated to some special International guests, Gordon Southern and Marcel Lucont!

I absolutely loved both of their shows so I was delighted to see them again. Gordon brought his usual brand of silliness and one liners, along with his trusty sound effects box. He busted out some short sharp raps, including a soon to be hip hop classic about the middle ages. However is was Marcel Lucont who stole the show, this understated comedian had the audience in the palm of his hand, so much so that he managed to crowd surf all the way up the vertical seating of the SKYCITY Theatre! Absolute genius and one of my favourite NZICF moments of 2012.

I was so chuffed for Guy Williams as I had championed him since seeing him at Ben Hurleys New Faces show in Week One. I think he will go far in his career and I can’t wait to see what he does next. The Billy T Award not only includes the iconic yellow towel but also $2500 prize money plus a guest appearance on TV3 hit show 7 Days! These awards honour one of New Zealand’s greatest comedians, the late Billy T James.

Rhys seemed genuinely humbled and proud when accepting his award from Jan Maree, a comedian he had been a Billy T finalist with in 2001!  The Fred Award recognises and celebrates Rhys’s outstanding achievements in comedy in New Zealand which had taken him all the way to Hollywood. He finished his acceptance by promising to bring This Way To Spaceship back home following his UK tour and season at the Edinburgh Festival.

It was a fantastic end to a fantastic festival where New Zealand can be proud that live comedy is alive and well and thriving.