Last night I was reunited with my ‘queue buddy’ whom I had spent over three hours with one early April morning while we waited excitedly to get our tickets for last night’s show, Flight of the Conchords, at Auckland’s Town Hall. Finally the night was here and we stared down at the stage, filled with various instruments and two empty chairs, with the same anticipation we had felt when we finally bought our tickets. 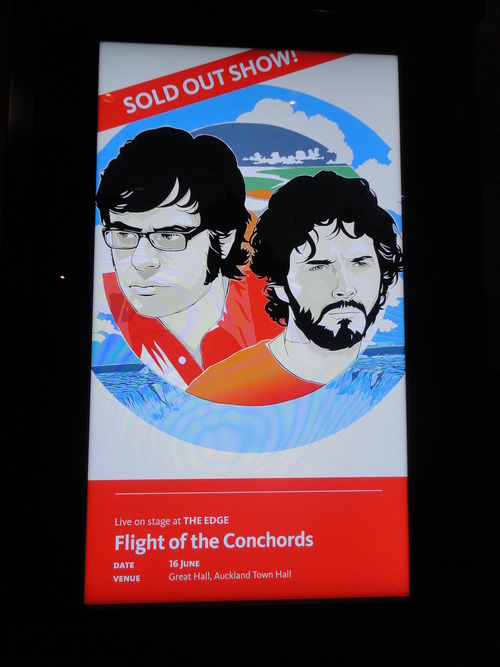 The evening began with excellent stand-up from Arj Barker, aka Dave from the Flight of the Conchords TV show, who got the crowd going and only slightly damaged the set. He was a great warm up who had the audience in hysterics over his paranoia of that one surviving germ not killed by the 99.9% Toilet Cleaner, creating visuals in my head of a Rocky esque germ working out under the lid of my loo!

He also commented on his literary taste with his love of Lord of the Rings and Peter Jackson, but not in the context you would expect. He is a confident but laid back comedian who was welcomed by the audience. Overall he was a great start to the show and his jokes are still making me smile as I write this. Unfortunately I failed to get a picture with him twice last night, firstly by just staring at him resulting in my walking in to another women, and secondly by tweeting too much to notice he had already left!! Here is the slightly stalking picture I did get of Arj Barker!

On to the main event now, and the Town Hall erupted with woops and cheers as Jemaine Clement and Brett McKenzie walked on stage in silver jackets with their heads in boxes and they launched into the electro sounds of ‘Too Many Dicks On The Dance Floor’. A swift and impressive costume change (turning the tinned foil covered boxes around) lead them into their next tune, and the audience into the future, with the track ‘Robots’ where all the ‘humans are dead’.

This was the start of our journey with these two impressively talented musicians and comedians. Once de-boxed and primped by Matt, the tour hairdresser/soundman/tour instagramer (@mattdshane) they weaved their music around their crazy anecdotes of being ‘on the road’!

The Conchords can jump around sounds and genres, and do so extraordinarily easily, as they work their way through the instruments we see on stage including; maracas, a triangle and a wooden wazinator!!!  They were also joined on stage by cellist Nigel Collins, and Arj Barker returns for few guest appearances too! Flight of the Conchords on stage at Auckland’s Town Hall along with Nigel Collins (PHOTO:Ian Wright)

We were swept out of the future and in to the past with the brilliant story of how to woo a lady in the ‘Summer of 1353’. Later we travelled Across to Europe for ‘Foux da Fafa’ and experienced the synthtastic ‘Inner City Pressure’, the sweaty eyes of ‘I’m Not Crying’ and the joys of ‘It’s Business Time’ all arranged around the most excellent of carefully selected mood lighting. It should go without saying how amazingly talented these two are, but I really was blown away by the consistently high standard of their performances.

Their set featured songs new and old with ‘classic hit followed by classic hit’, as Brett commented, leading to their ultimate finally and one more very special final costume change.

Thankfully the standing, cheering and wooping audience meant we got our much demanded encore ending a brilliant and unmissable two hour show that I would gladly watch again and again.

The tour continues around New Zealand until 2 July, returning to Auckland on the 29 June and 1 July http://flightoftheconchords.co.nz/on-tour/