Drew Goddard and Joss Whedon’s much talked about  horror flick has landed in New Zealand. Filmed in 2009 it was shelved due to financial difficulties but was finally released in 2012.

Thanks to the New Zealand International Film Festival we finally got the chance to see what everyone has been talking about. 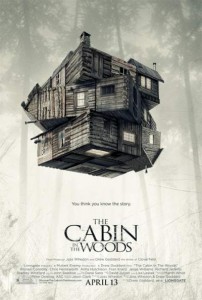 The beautiful and well toned young cast (Kristen Connolly, Chris Hemsworth, Anna Hutchison, Fran Kranz, Jesse Williams) set the perfect scene for a classic horror when they take a trip to a isolated cabin in the woods.

However, all is not as it seems as things start to unfold, this is not your average slasher movie.

From the outset the strength of the tongue in cheek script creates a fun and accessible watch . Like the Scream franchise before it, this film is not taking itself too seriously, but has intelligently deconstructed the genre and in fact added to it.

With an outstanding overall concept it feels fresh and original, with many unexpected twists and turns throughout. You don’t need to worry about predictability here. 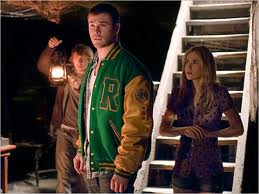 The brilliant performances are not reserved just to our pretty young teens in peril, who play their cliche parts superbly, but include a wider cast who provide equal entertainment value. A personal favourite was Richard Jenkins.

On top of providing some great scares, jumps and a fair bit of gore you get plenty of comedy entertainment too, showing off the excellent writing skills of Goddard and Whedon.

This film will not disappoint just steer clear of spoilers before viewing!!!