Trick of the Light Theatre are to bring Wellington’s iconic ‘Blanket Man’ to the international stage in their new play.

The ‘local legend’, real name Ben Hana, passed away this year but has inspired a character in The Road That Wasn’t There which will premiere at the Edinburgh Fringe Festival in August. 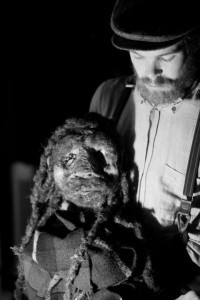 “I’m interested in the ways by which contemporary myths are created……..Who better to draw on than a man who was mythologized in his own lifetime?” he continues  “We’ve reimagined the character as a swagman in Depression-era Central Otago.”

A story rooted in New Zealand folklore , this children’s play combines three actors with 53 puppets and live music into a twisted fairy tale about a girl who follows a paper road on a map, and finds herself in a paper world.

A puppet called ‘the Blanket Man’ features as a character who shows her the way. Think Coraline, Pan’s Labyrinth and Margaret Mahy.

Originally from Wellington the Trick Of The Light Theatre’s previous show ‘The Engine Room’ was nominated in six categories at New Zealand’s 2011 Chapman Tripp Theatre Awards, and won McCubbin Howell the prize for Most Promising New Playwright.

The Road That Wasn’t There will be at The Edinburgh Fringe Festival 2012 from 2 – 26 August.