The story of Hairspray the musical started in 1988 with the film by John Waters, which starred Riki Lake and Debbie Harry.

Opening in Broadway in 2002, Hairspray won 8 Tony Awards and ran for 2500 performances so it’s no surprise that Wellington Musical Theatre wanted to put on this upbeat and fun musical.

The story is set in 1960’s Baltimore  where hairspray, big hair and dancing are the order of the day.

The story follows the plump oddball teen Tracy Turnblad, whose dream is to dance on the Corny Collins TV Show. When she achieves her dream she is thrust into celebrity and tries to make a difference in 1960’s America, by fighting for integration on the TV show.

The rest of the set comes on and off stage seamlessly from the wings or above.

Opening with Tracy Turnblad belting out ‘Good Morning Baltimore’ you will instantly know what your in for. A fun, brightly coloured, foot tapping, tongue in cheek musical. 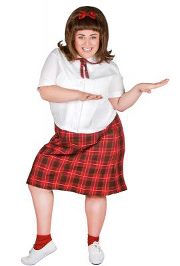 This is epitomised by Corny Collins himself, played by Nick Purdie, whose glistening suits and even more glistening ‘All American’ smile transports you into the small screen of 1960’s America.

Melissa Peters is a true star on stage with a beautifully powerful voice and fabulous dance moves, as well as great over the top intonations when needed. She worked well with her cast displaying excellent comic timing and playing the teenage crush to perfection.

Her first time working with the Wellington Musical Theatre Company gives her the chance to play her ‘dream role’ in a musical (as stated in the programme) and I am sure they will want to keep a firm hold of her after this superb performance as Tracy. 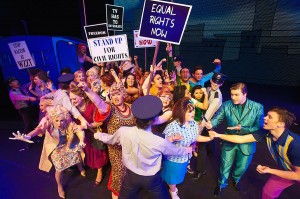 The cast of Hairspray NZ during the protest scene

Julie O’ Brian and Shauni Hannah play Velma and Amber Van Tussle providing us with the villains of the piece, the ultra competitive pretty blonde teen and her ex beauty queen pushy mother.

They bounce off each other and we even get so see Velma in all her crowning glory with the hilarious ‘(The Legend of) Miss Baltimore Crabs.’

Shauni struts her stuff excellently on the Corny Collins show from the start whilst later getting to display her more jealous and antagonistic traits. Every hero needs a good nemesis and these two are just that, seemingly revelling in these characters nasty sides!

Tracy’s best friend, Penny Pingleton, was played by Bridget Connor. She received a lot of laughs throughout for her awkward geeky persona of a girl who goes through a metamorphosis during the show to become a key part of Tracy’s civil rights fight. Penny was enjoyable to watch and she too demonstrated a fantastic singing voice and brilliant stage presence. 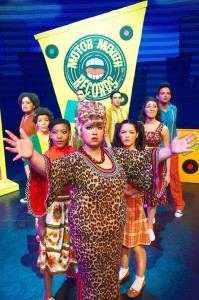 A womanly force to be reckoned with was Maybelle Motormouth, the host of ‘Negro Day’ on the Corny Collins Show. She is the powerful mother figure who embraces her race, music and size. Played by Jessie Maguren she displayed her vocal prowess and confidence in ‘Big, Blonde, and Beautiful’ but especially during ‘I know Where I’ve Been’.

The male cast are also very strong here. The man that shows Tracy some moves and inspires her to unite and integrate the Corny Collins Show is Seaweed J Stubbs, played by LeRoi Kippen. He proved extremely popular with the crowd and led the way with the boys dancing! His interactions with Tracy and love interest Penny where both endearing and comical.

The other male heartthrob, and object of Tracy’s desire, is Link Larkin, Caleb Jago-Ward. The two worked well together and this ambitious crooner has the swagger to pull off the pop star vibe. A personal favourite was ‘Without Love’ which oozed teen infatuation without taking themselves too seriously.

Another comic favourite was Raef Mitchell who played Tracy’s father Wilbur, an eccentric joke shop owner whose love ,and indeed lust, for his wife was infectious and hilarious.

However it was Wilbur’s duet with onstage wife Edna Turnblad, played by Sam Benton ,that spawned the biggest laughs and reaction on the night. Some onstage giggles helped to cement this playful relationship during ‘(You’re) Timeless to Me’

So that brings me to the larger than life Edna, Tracy’s mother who is a ‘women’ just waiting to get out there and it’s ‘Welcome to the 60’s’ that’s get’s her there. She shakes her stuff and Sam is truly having fun with this buxom broad who finds pride and confidence through the music and love of the 60’s.

The ensemble cast worked hard to provide the atmosphere and energy this show demands. With umpteen costume changes and even more dance routines they did a great job and added the depth to fill this stage with colour and positivity.

We mustn’t forget the musicians and singers in the theatre pit whose talent does not go unnoticed. Another star of the show must also be the costumes, many of which will really make your eyes pop!

If I was to give any negative comments on the show it would be that they had a few sound issues on the night with feedback and some mics not being at the right level, which did mean missing dialogue.

Overall this is a bright and fun musical whose star, Melissa Peters, transmits youthful excitement throughout so you can’t help but get sucked in to this colourful extravaganza.

Hairspray is playing at Wellington Opera House until 11 August. For more information and tickets go to the Hairspray website.