This week we were Keeping Up With Alex Ellis, one half of  the creative partnership Flaxworks, the Theatre Company bringing us Drowning in Veronica Lake later this month at Q Theatre.

Alex talks to us about her extreme consumption of caffeine rich food on stage, her interest in the late glamorous Hollywood Starlet Veronica Lake, and her dream leading man.

‘Drowning in Veronica Lake’ is Flaxworks fourth production, can you tell us about your past works?

“Our first show was Biscuit & Coffee, about a bizarre family obsessed with coffee history and which required me to consume six espressos during the performance.

The second production, Murder by Chocolate had us both (Phil performed in this one too) wolfing down about a kilo of chocolate each night – which sounds awesome but I have to say it did put me off chocolate for a little while, actually probably only a couple of weeks but still! In our third production Carol & Nev I played a dead woman haunting a campervan.

So, as full on as she was, Veronica Lake has a refreshing authenticity about her and we’ve moved on from the extreme consumption of caffeine rich food!” 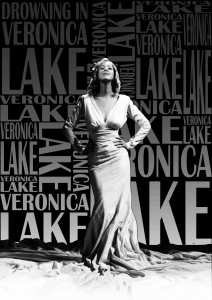 “Who wouldn’t want to play a glamorous Hollywood Starlet? Even though she did die a lonely alcoholic.

Veronica Lake enjoyed a short reign as a major Hollywood celebrity in the 1940’s before virtually disappearing overnight. For ten years she provided tabloids and movie magazines with gossip and scandal most of which was carefully managed for full effect by the studio’s publicity machine. After she left Hollywood (or was dumped depending on who you want to believe) her career rapidly declined but she never gave up believing she would come back.

I find it fascinating that hers is a story that repeats itself throughout the entertainment industry – a performer unprepared for sudden fame finds themselves isolated in self medication and denial. In the end the gossip can overshadow the performer’s actual achievements, Marilyn Monroe, Michael Jackson, Charlie Sheen, Whitney Houston, Lindsay Lohan….. but Veronica Lake set the standard. 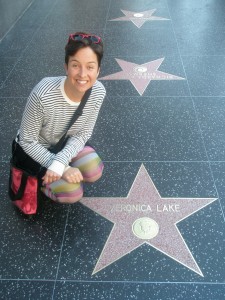 Alex by Veronica Lakes star on the Hollywood Walk Of Fame

The best thing about Veronica is for every story about her there is a conflicting version. She published a biography in her later years rehashing stories from her glory days and after her death her mother also wrote a book which contradicted much of Veronica’s. With the passage of time not much is verifiable and the play hints that none of it may be true at all. It’s a fantastic story.”

How have you prepared for the role?

“We made a conscious decision at the start of the process that we weren’t making a tribute show, we don’t want to copy her exactly. The idea is that Veronica Lake herself is more of a Hollywood invention than an actual person. So I watched a few of her films and read some of the many and conflicting stories about her and then just started rehearsing. Of course I also get to wear a beautiful gown and wig which makes me feel like a Hollywood star!”

“I think my favourite would be Sullivans Travels which is the film we are playing on our double feature night on Saturday 25th. It’s a great story, and it was the first role Veronica Lake got that wasn’t just about her looking gorgeous and playing the sexy femme fatale, she actually got to act.

So that means something to me now after doing the show because she always wanted to be appreciated as an actor. She was very excited to be in a movie written and directed by Preston Sturges who was one of the biggest directors at the time.”

If you could pick your own leading man from the era who would it be?

“I think I would have to say Jack Lemmon or Tony Curtis. Some Like it Hot has to be one of the funniest movies and I have to say a man with a sense of humour is very sexy, even if he is wearing a dress and trying to escape from the mob.”

Drowning in Veronica Lake is at Q Theatre from 22 August until 1 September. For more informations and tickets click here.

Flaxworks is the creative partnership and theatre company from Alex Ellis and Phil Ormsby.