From The Royal Tenenbaums to Fantastic Mr. Fox to my personal favourite, The Darjeeling Limited, Wes Anderson’s directorial and writing prowess more than speaks for itself.  Already a fan of his work, I knew I was not going to be disappointed by Moonrise Kingdom. 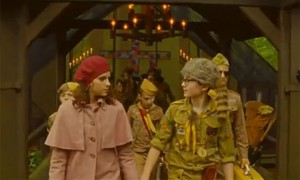 Set on a fictional island in 1965 New England, Moonrise Kingdom put simply is an unconventional tale about young love.  Sam, a socially awkward boy scout, escapes Camp Ivanhoe so he can run away with Suzy, a pen pal who also happens to be the love of his life.  Believe me, this is not the strangest thing you will come across in this story.

The film boasts a star-studded cast from Bruce Willis who was the rather unassuming police captain to the straight-laced Scout Master played exceptionally by Edward Norton, plus a brief but fantastic cameo appearance by Tilda Swinton (only known as “Social Services”).  My favourite character though was Suzy’s eccentric lawyer father played to perfection by the incredible Bill Murray.

Stellar Hollywood pedigree aside, it is the children that really steal the show, in my opinion.  With their youth comes a childlike innocence but throughout the course of the story there are many times where their characters actually behave more maturely than the adults!  Jared Gilman and Kara Hayward thoroughly impress as Sam and Suzy, particularly considering this is their theatrical debut.

Check out the trailer for Moonrise Kingdom

What I absolutely loved about this film was how colourful it was, and not just in the literary sense.  Aside from the colourful array of characters that make up the ensemble cast, the world in which the story unfolds is just stunning.  The picturesque island and its surrounding landscape is bathed in a very orangey green tinge giving everything an almost unreal quality but which aptly fit the film’s whimsical nature and outdoorsy setting.  Alexandre Desplat’s wonderfully playful score perfectly complements the narrative and ties this masterfully written and visually engaging story together.

Moonrise Kingdom is charming, quirky and just beautiful.  It celebrates life and the world as seen through the eyes of a child.  Be prepared to be swept away on this fantastical and extraordinary adventure.

Moonrise Kingdom debuted on the big screen at the New Zealand International Film Festival and releases in cinemas on 30 August.