They’ve done it again! Not only have they chosen the thought provoking play and social commentary that is ‘The Pride’, but they have put together an uber talented cast to excellently portray it.

The debut play by Alexi Kaye Campbell opened in 2008 in London resulting in four awards , now Silo Theatre have brought this play to Auckland currently showing at the Herald Theatre. 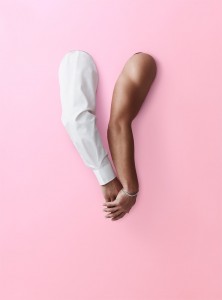 ‘The Pride’ tells the story of the attitudes towards homosexuality both in 1958 and 2008. Following the characters in two different Worlds, we experience how life has changed for homosexual men over the last 50 years.

Covering the contradictions of repression, rebellion and freedom, the story is told with only four actors.

The central trio are Philip, Oliver and Sylvia whose parallel lives are shown across two different times to reflect the complexity of their love for one another, and the progression of our changing attitudes towards sexuality.

The play is intense, emotional, shocking and hilarious enabled by not only the brilliant script, but the supurb direction by Sophie Roberts.

The set changes and ‘time echoes’ are seamless, making a simple set create many scenarios in the audience’s imagination.

The symbolism of echoes and reflections are also told by the set and lighting used during the play. The glass patterned backdrop and subtle use of spotlight enable the characters  to linger and reflect each others experience, allowing the transition from scene to scene to happen with ease.

The performances here are fantastic,with quick paced dialogue and awkward social exchangers we first meet our three protagonists, these uptight and repressed individuals of the 1950’s 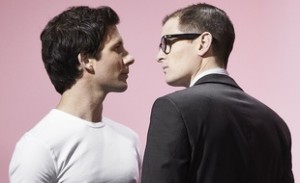 Oliver, played by Kip Chapman, gets to play a more creative and fun character able to express his feelings more openly than the restrained forbidding nature shown from love interest Phillip.

Philip’s hatred for his feelings and the constraints he puts upon himself are apparent form the opening scene thanks to Simon London’s intensity, and these will later take him to many dark and sad places. The journey that he takes is probably the darkest in the play and Simon brings depth, understanding and sensitivity to a character who represents all that we should sympathise with from this repressive time.

Sylvia is an outwardly fun and expressive women who is hiding a deep sadness and Dena Kennedy shines in her ability to gain both laughs and empathy from the audience.  However it is in the modern world where she is allowed to come to life, to be the women that she should have always been, while also being a guardian angel to her dear friends Ollie and Phil.

Oliver’s later alter ego Ollie is a man struggling with his abundance of freedom, or ‘slut-stuff’ as it’s more eloquently put in the play, and is the character that highlights that the modern world is by no means perfect.

Kip Chapman is able to perfectly convey both the romanticism of the dream and the reality that it’s not quite there yet. His comic timing and cheeky interactions actually help highlight the heavier issues in the play by using humour, as we often do in life, as he moves from repression to promiscuity to happiness.

The whole cast demonstrate tremendous skill  in their quick transformations between era’s. They swap from dark devestation and heartache to light hearted banter within moments.

Sam Snedden has the honour of providing the audience with the characters outside the trio. From his first appearance as a Nazi to his last one as a 1950’s psychiatrist he demands our attention and also holds a key role to communicating the changing society over the last 50 years. His performance is flawless and talent obvious as he brings to life three very different roles during the play.

This play deals with love, loneliness and desperation and freedom, progression and understanding.

The Pride is an important piece about our society and how we can always grow and develop but all importantly it is a play about love and the freedom to love. Brilliantly clever and abundantly heartfelt.

Silo Theatre’s The Pride is on at The Herald Theatre until 1 September.