Walking into the Loft at Q Theatre we were immediately confronted with a magnificent and dominating white gown that covered the stage around a lone feminine silhouette who stood with her back facing the audience.

This was the opening night of Drowning in Veronica Lake, the forth production from Flaxworks, written by Phil Ormsby and staring Alex Ellis as the Hollywood starlet Veronica Lake. 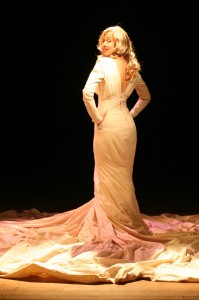 This 65 minute monologue finds Veronica Lake, or Connie Keane as she was pre Hollywood, literally trapped within herself as she narrates the story of her life.

With anecdotes of success to failure, marriage, motherhood and tall tales with alcoholism thrown in for good measure, this is a story worth hearing and who better to tell it than the women herself.

The play goes through the highs and lows of a girl who was thrust into the spotlight by a pushy controlling mother only to be adopted by the even more controlling Paramount Studios.

‘Veronica Lake’ becomes a commodity and she tells us of her loss of identity. We hear of divorce, unwanted children and the gradual decent into addiction and bankruptcy. 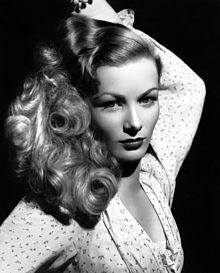 However it’s not all doom and gloom, most of the yarns are spun with great wit and a fair share of brilliant repartee all told through her iconic blonde ‘peek-a-boo bangs’.

All the while she is centred to the same point around the elegant gown which ties her to Veronica while drowning in her ultimate decline and sorrow.

Alex Ellis embodies the character demonstrating fantastic physicality from head, shoulders, down to hips and all the way to her finger tips! Her hip wiggles mixed with her sultry drawl were 100% Old Hollywood.

Her talent shines through further as she conveys not only Lake but other narration and also her mother, who gives us a running criticism of her daughter in her thick Brooklyn accent. Throughout the play she becomes more inebriated going from fun party girl to depressive drunk and one that was played superbly with an abundance of emotion.

As the play gathers pace so do the characters and scene changes which must be extremely challenging for an actor but Alex impressively doesn’t falter, swiftly changing voice and posture to suit.

During Veronica’s decline we hear snippets of echoing songs from old movies. Veronica desperately tries to sing along as they become more disjointed and distant the further she drowns in to her depression. I found this to be a powerful yet subtle use of sound.

Lighting is used to indicate set, scene and character changes helping the audience get swept away in this nostalgic and tragic swan song as the smooth execution led us from one scene to the next.

I will have to end this review as it started it by mentioning the second cast member in the play. The magnificent dress worn by Alex is both a perfect metaphor and beautiful costume, epitomising the theme of the piece. Big congratulations to Sara Taylor and Elizabeth Whiting.

I would highly recommend this insightful play showing at Q Theatre until 1 September.

As Veronica would say ‘Celebrity may last a lifetime but only stars are immortal.’

To find out more about Alex Ellis and Flaxworks have a read of our interview from earlier this month.