Based on a story from best-selling author Jo Nesbø, comes this snappy, dark festive Norwegian comedy.

Set near the Norway – Sweden boarder Oscar Svendsen wakes up in the aftermath of a massacre clutching a shotgun. He is the prime suspect in this action caper which tells the tale of four ‘lucky’ men, Oscar, Thor, Billy and Tresko (The Clog), who win the soccer pools.

Kyrre Hellum plays Oscar, the likeable and hapless Christmas tree factory manger whose ex-con employees turn out to be quite a handful when 1.7 million Krone is involved!

The story unfolds in a series of flashbacks as Oscar is interrogated by Norwegian police detective Solør. How can he explain how he came to be surrounded by eight bodies in a strip joint? 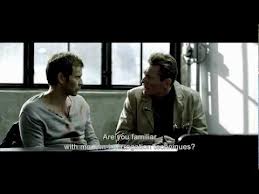 Solør a intense, no-nonsence police officer who is brilliantly played by Henrik Mestad who gives a stand out performance here. He doubts Oscar’s story and tries various techniques, and indeed noises to try and get his confession.

The pace of the film is perfect and the plot has enough twists and turns to keep you interested. 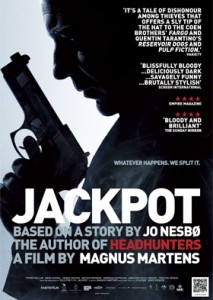 Jackpot echos influences from Quentin Tarantino and Guy Richie with it’s witty script and sometimes gratuitous violence. Reservoir Dogs and Lock stock and Two Smoking Barrels spring to mind, it is however small town rural Norway which makes for an outrageously fun movie with lots of dry, and at times unexpected humour.

Although there is a niggiling feeling after watching the film that you haven’t seen anything particularly new, you can’t help but be entertained by this quirky Scandinavian saga!

Jackpot is produced by Fantefilm and distributed by Nordisk Film Distribusjon. The film has been directed by Magnus Martens who also co wrote the film with Jo Nesbø.