Bret McKenzie and Hamish Blake need no introduction to the Kiwi audience.  These two well-known and well-loved TV personalities will undoubtedly be the key pull factor that will drive admissions to this film.  However this delightful homegrown film has so much more going for it than just star power.

Directed and co-written by Robert Sarkies, Two Little Boys is a dark, irreverent comedy about the misadventures of childhood friends, Nige and Deano. 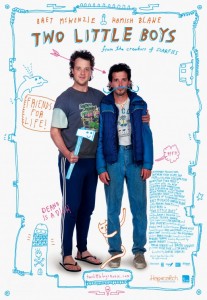 It is set in 1993 Invercargill and after a series of unfortunate events involving a hot meat pie and a ginger cat, Nige finds himself in a spot of trouble when he accidentally runs over and kills a Norwegian backpacker.

When his attempts to cover up his tracks fail abysmally Nige seeks help from Deano, his former best friend. Revisiting this ‘bromance,’ along with gooseberry Gav, is the underlying vein that runs throughout the course of the story. It explores what happens when friends “break up”

The two reunited buddies go to great lengths to cover up the body and this is what forms much of the comedy in the film.  Their mission brings them to The Catlins and much to Deano’s dislike, Gav ‘the other friend’ unwittingly joins them on the trip.  As the plot unfolds, Nige and Deano’s bromance really gets put to the test as things begin to escalate and get increasingly ridiculous.

This is very much a character-driven film and Bret and Hamish are perfect as the mulleted duo.  Bret’s facial expressions are just superb and bring a whole new level of comedy to the story. 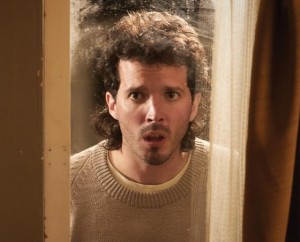 Hamish really excelled in bringing the “creepy factor” to Deano.  I thought he embodied the needy, act-on-impulse and borderline deranged Deano brilliantly.  Maaka Pohatu is also perfectly cast as the lovable Gav and antithesis to Deano.

As with all New Zealand films, it would be a crime not to showcase the beauty of the landscape and this film does it in spades.  With a stunning backdrop of the Southern Scenic Route, mostly localised humour, as well as a very apt soundtrack of familiar Kiwi classics, this is very much a New Zealand film.  There is always a certain level of scepticism when it comes to homegrown product, but I do feel that the comedy in the film is genuinely humorous enough to tickle anyone’s funny bone.

Two Little Boys is a riotous tale that is incredibly entertaining and very tongue-in-cheek and I enjoyed every minute of it.

If you are not easily offended by copious amounts of swearing and a bit of graphic violence, and you enjoyed the 2006 Kiwi black comedy Black Sheep, this film is for you.