The Bartered Bride opened at the ASB Theatre, Aotea Centre to a full house on Saturday 22 September.

Although many will think of Italy when they think of opera it is with this Czech piece, by Bedřich Smetana, that NBR New Zealand Opera have brought together an excellent cast. New Zealanders Anna Leese, Conal Coad, Andrew Glover, Patricia Wright, Richard Green and Helen Medlyn perform along with Australians Taryn Fiebig and John Antoniou and Englishman Peter Wedd. 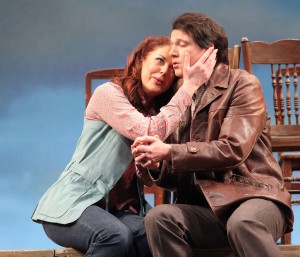 If you have never seen an Opera before I can’t think of a better place to start. Performed in English this comedy about Bohemian life and love is not your average opera.

It tells the story of two lovers, Mařenka and Jeník, who wish to be together but Mařenka’s parents have other plans for her with marriage broker Kecal.  When Kecal announces that he has found a groom for Mařenka, Vašek the younger son of wealthy landowner Tobiáš Mícha, Mařenka could not be more opposed, leaving her social climber parents shocked.

Mařenka does all she can to ensure the marriage to Vašek won’t happen but meanwhile it appears her true love Jeník has betrayed her. Will their love bring them back together? 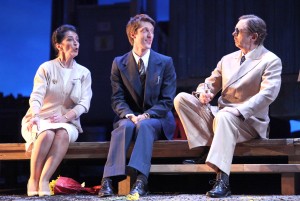 Although in a cast of World class performers it is difficult to single anyone out I did feel that Anna Leese as Mařenka gave a wonderfully passionate performance with stunning beautiful vocals. I enjoyed her songs and interactions with lover Jeník, who is played perfectly as a strong leading man by Peter Wedd. I also really enjoyed the performance from Andrew Glover as the stuttering and innocent Vašek. He was an endearing character who was sweet and funny to watch. I can also imagine that Vašek stuttery song must be a hard one to perform, but he makes it as honest and heartfelt as I imagine it is intended.

The show features some fabulously choreographed scenes particularly a bar brawl, which quickly escalates into comic acrobatics with bodies flying across the stage (causing the woman next to me to gasp!). 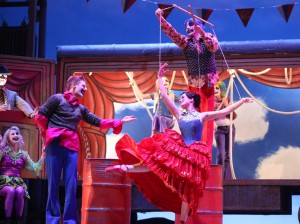 The other major wow factor of the production is when the Circus comes to town. You are treated to an excellent demonstration of circus skills from  gymnastics, somersaults, stunts and tumbling which fill the stage with energy and colour from this show within a show. They use the space well giving the illusion of a big show in a relatively small space, a triumph for Tim Claydon and his team.

The music is upbeat and fun with a folk sound which conjures up visions of villagers dancing and drinking. This production has updated the original setting to be in Czechoslovakia of 1972, four years after the Prague Spring.

The bright 70’s costumes add to the fun and comedy of the piece and may even help those less accustomed to opera to take it to their hearts. Daniel Slater has created an excellently accessible production with a flawless cast giving this opera an injection of dazzling vitality on stage.

This is a colourful, fun and upbeat extravaganza of a show that will be as pleasurable for the eyes as it is for the ears.