The Sapphires tells the story of a young Aboriginal girl group who travel to Vietnam in 1968 to sing their hearts out for the troops.

Originally an Australian stage play it has now been transferred to the big screen by the original writer, Tony Briggs, and director Wayne Blair.

The Sapphire’s story begins where they grew up, on a mission settlement in New South Wales. It is inspired by the real-life tales from the writer’s family, of a little known Aboriginal girl group from the 1960s.

In a time of extreme racial tension, only a year after  the Australian referendum expanded the rights of Aborigines, these strong young women set their sights on the stage.

However although they have the raw talent, their country and Western style isn’t quite what Dave is looking for so he persuades them to reinvent themselves as a soul group. The Sapphires are born and off they set for the adventure of a life time in Vietnam.

You will be surprised to find that this film is not as soft and fluffy as it may first appear. What The Sapphires does superbly is tell a human story of love and heartache while communicating an uncomfortable Australian history. 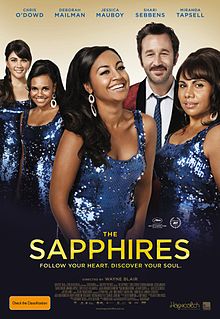 The music is excellently selected to really show off the girls vocal performances. Jesssica Mauboy, Australian Idol runner up, excels as the lead singer of the group. Deborah Mailman also has her chance to shine in an emotional solo. With tracks from Sam & Dave to Gladys Knight and The Pips you are sure to know a tune or two.

The shots in Vietnam feature historical footage as the film reminds the audience of the obvious dangers and horror of war.

The film is also packed with one liners and comedy moments, prominently reserved for Chris O’Dowd and Deborah Mailman, whose chemistry radiates through the screen.

We had the extra pleasure of watching The Sapphires in the presence of its director, Wayne Blair, who held a Q&A after the film.

When asked if he intended to make a political film he said that he always wished to tell a story first, but that there were some key messages and historical events that would inevitabley be communicated. He stressed that the racism that the girls would have experienced is only partly touched upon.

He spoke fondly and proudly of his cast who have brought this story to life, one that he feels is a story for everyman.

The Sapphires is intelligent, funny and heartwarming with buckets of soul!