The magic of Mary Poppins has well and truly arrived in New Zealand and the opening night in Auckland was nothing short of spectacular .

Arriving to a red carpet, the Civic Theatre looked primed for a special night and if dancing statues, bottomless handbags and magical umbrellas aren’t special then I don’t know what is.

Disney and Cameron Mackintosh’s smash hit musical brings us this much loved story which has been brilliantly adapted from the books by P.L Travers and the classic 1964 Disney film.

Most of us will have memories of Mary Poppins from the film with Julie Andrews and Dick Van Dyke so this production will always have those to live up to.

However the stage production, first opened in 2004, has proven to be a worldwide success and now it’s New Zealand’s turn.

The story of the magical nanny who comes to help the Banks family at No. 17 Cherry Tree Lane features many of the films classic songs by the Academy Award winning Sherman Brothers, as well as additional music and lyrics by George Stiles and Anthony Drewe.

From the moment the curtain goes up you enter a spellbinding world. I believe the first gasp was at the wonderful set design which allows pieces to open, close, slide and lower from the roof. It reminded me of reading a popup book as a child and how you felt you could just jump inside. I was particularly impressed by the bank scene.

It’s wasn’t long before the toe tapping began as I was swept away by the infectious music that seems to be somehow an innate part of childhood.

The choreography by Matthew Bourne and Stephen Mear is of course magnificent and all perfectly executed by this immensely talented cast. One particular number deserves a special mention for it’s especially complex routine, Supercalifragilisticexpialidocious is the best musical dance number I’ve seen! 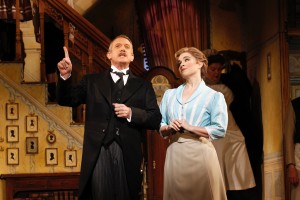 Simon Burke and Pippa Grandison as George and Winifred Banks

The Banks family tell a story of love, struggles and hope depicted perfectly by the forever cheerful Mrs Winifred Banks ( Pippa Grandison) and the more stiff and authoritative Mr George Banks (Simon Burke). Their story of financial, work and family troubles is a timeless yet modern one. The younger cast members Hattie Hook and Ky Baldwin, playing Jane and Michael Banks, were very accomplished performers and did an amazing job in these demanding roles proving themselves to be consummate professionals.

Delia Hannah gave a hauntingly beautiful rendition of Feed the Birds as the Bird Woman and Natalie Gamsu is sure to have scared more than just the Banks children as the brilliantly wicked Miss Andrew.

Matt Lee plays the enthusiastic and chirpy chappy Bert, bringing energy and fun to his performance. His instant likeability shines through and is great fun to watch. 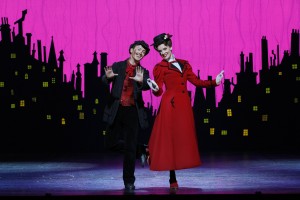 Rachel Wallace and Matt Lee as Mary and Bert

Of course it is the umbrella wielding Mary Poppins that we were longing to see and she is played by the beautiful Rachel Wallace. Rachel is every bit Mary Poppins as Julie Andrews was. She seems to totally and utterly epitomise the character from head to toe and gives a faultless performance as the magical nanny. You could say she is practically perfect in every way!

This is a show for all the family and will definitely leave you with a smile plastered on your face with a little bit more magic in your step.

This really is a fantastically spectacular production of awe inspiring proportions. If only there was a better word to describe it???

Have a look at our pics from opening night on our Facebook page.