Last night I went along to the Bruce Mason Centre in Takapuna, Auckland to check out a much talked about international show Potted Potter.

Now I’m not a massive Potter fan (I’ve seen the films but not read the books) but I am familiar enough to think this would be a fun show.

Jesse Briton and Gary Trainor tackle the seven books playing everyone from Harry himself to a Mad Eye Moody. 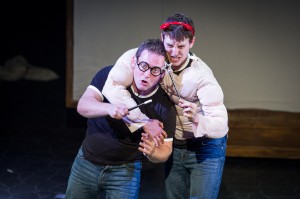 It took me a while to get into the show but this was certainly not the case for much of the audience, many who came suitable attired in Hogwarts scarves and wielding wands.

The show let me experience the excitement of my first ever actual game of Quidditch, much to the delight of the audience who where literally jumping out their seats to take part. There were also magical props such as the fire breathing dragon (with the use of a little imagination).

My highlights were the excellently executed and hilarious songs and the best use of an array of wigs and hats I’d ever seen. My favourite character however has to be the wonderfully evil Lord Voldemort!

Jesse and Gary have excellent performance skills and brilliant comic timing when engaging with the audience. They even manage a few pokes at the main man Harry himself!

By the end of the show they had won me over and it really is one for all, from Dobby to Dumbledore!

So forget being overly knowledgeable on all things Potter, who cares if you don’t know your Hogwarts from your Warthog, this show is an excellent night out that screams family entertainment at it’s best.

You can see Potted Potter at the Bruce Mason Centre until 28 October.