Theatre gets a little bit gruesome this Halloween with Theatre Macabre, a bloody and funny double stab of Horror Plays for brave audiences at Q’s VAULT.

Theatre of Love (Free Load, Day After Night) and Rebels and Robots (Play me Deadly, Some Explicit Polaroids) have joined forces to present two plays each night. Audiences will have to be brave enough for THE SOMNAMBULIST by Thomas Sainsbury, and MEAT by Benjamin Teh all performed live with nowhere to hide!

The Somnambulist sees recent immigrants Hugo and Jordana job seek by day and watch television by night. Their daily routine is thrown into disarray when one morning Jordana wakes up with blood on her hands. It’s not her blood, it’s not Hugo’s blood. It’s someone else’s. And Jordana has no memory of how it got there??? 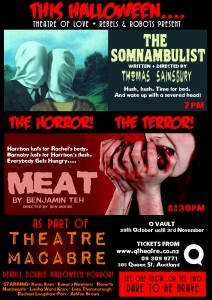 Playwright and Director Thomas Sainsbury, one of New Zealand’s most popular and prolific playwrights, is no stranger to the Horror genre.  He says,

“I love the horror genre because it is the most primal and basic of all the genres. It is also the most universal; it’s something everyone can relate to. It taps into people’s core reptilian brain. There is a monster and you have to run from it otherwise you will get eaten. I also love the high stakes involved within the genre. It’s live or die. You have to fight for your life. Very
thrilling, very exciting.”

Play two, Meat, is set in sinister boarding house, in a wild and lonely part of the country. New lodger Harrison must unearth the secrets this house holds where everyone is hiding something, and no one
wants to share. The landlord Barnaby is just too friendly, his daughter Rachel is beautiful but a little off, a creepy old man lounges around the house for hours on end, and the handyman never wants to leave but doesn’t seem to belong. Everybody gets Hungry.

Emerging playwright Benjamin Teh. Meat plays with the idea of cannibalism as a metaphor for the secret desires and hungers that people have. Benjamin Teh explains,

“Society considers certain acts repugnant, and labels them as crimes. Throughout history, different cultures or sometimes just circumstances have forced people into unthinkable acts. What if these acts were everyday occurrences?”

So if you fancy a double fright their are special ticket discounts to experience both of the play’s
shocks and thrills.

These petrifying plays will be at Q Theatre’s Vault from 30 October until 3 November.