Based on the original 1960 film by Roger Corman and inspired by the 1982 Off-Broadway production, this Auckland Theatre Company interpretation of Little Shop of Horrors, directed superbly by Simon Coleman, brings to life everything I remembered enjoying about this quirky musical and more.

The story is set in 1960s Skid Row and begins in the failing Mushnik’s Flower Shop.  Seymour is the clumsy, geeky florist assistant who becomes an “experimental botanist” overnight when he discovers a strange-looking plant after an unexpected eclipse of the sun. 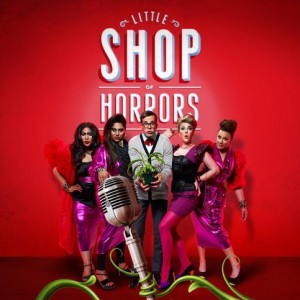 Business begins to boom as this mysterious plant becomes a popular local attraction while Audrey, the co-worker he is secretly in love with, is starting to take interest in him. There’s only one problem – the plant, aptly named Audrey II, has an insatiable appetite for human flesh and blood.  As the story unfolds, we see Seymour battle with his conscience and faced with a moral dilemma.  He has his dream life and love but can he live with himself knowing it came at the price of catering to the plant’s carnivorous needs?

What I was most curious about was how the plant was going to transfer from what I have seen on screen to the stage.  Apart from looking slightly obscene, I felt the creative team did an excellent job at bringing the titular plant to the stage.  Kyle Chuen, the man behind the plant and Rima Te Wiata, the voice of the plant, worked together harmoniously to breathe life and personality to this demanding and menacing creature. Audrey II aside, the other characters are realised by a talented ensemble of performers with impressive vocal chops.  Tim Carlsen was definitely the perfect choice to play Seymour; I thought he embodied everything about the character brilliantly and vocally he was flawless.  Similarly Colleen Davis was fantastic as the sweet but naive Audrey and Paul Barrett was excellent as the cranky, money-minded Mr. Mushnik.

I also really enjoyed Andrew Grainger’s portrayal of Orin Scrivello, Audrey’s sadistic dentist boyfriend and Seymour’s nemesis; he brought great comedy to an otherwise dark and unlikeable character.  Rounding up the cast is the fabulous trio behind Crystal, Ronnette and Chiffon, the resident street urchins who comment (mostly through song) on actions that take place throughout the story.  I thought they brought great sass and attitude to the stage, enhanced all the more by their many striking costume changes!

The set is stylistically quite simple and there is minimal use of props.  What really made the stage more dynamic and visually exciting was the perfect mix of creative lighting design (including a laser light show), well-timed theatrical smoke and fog, and clever use of visual projections.  The projections were used to not only indicate changes in location and time, but also to mirror street art and graffiti to give Skid Row an edgier, more dangerous feel to it.

Being a musical, naturally the music is an integral part of the story.  Inspired by 60s doo-wop with a dash of Motown and rock and roll, the melodies are distinct and catchy and you can expect to have any or all of the more well-loved tunes –Somewhere That’s Green, Downtown, Suddenly Seymour and Feed Me – resonate in your head for days after.  Led by musical director Jason Te Mete, the collaboration of Howard Ashman’s wonderful lyrics and Alan Menken’s gift of music are performed impeccably by a four-piece band tucked away backstage.

Little Shop of Horrors is a slick and colourful production that is visually and vocally stunning, delightfully hilarious and a whole lot of fun.  It succeeds in being both an utterly ridiculous farce and a deliciously hysterical and entertaining musical at the same time.  A definite must-see for all musical lovers.