The 23rd Bond film comes 50 years after the release of the very first, Dr No. In the year when James Bond escorted the Queen to the Diamond Jubilee celebrations this British institution isn’t going anywhere soon. 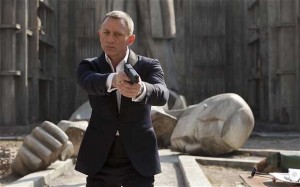 Skyfall sees Daniel Craig return as the MI6 agent for the third time, following the disappointing Quantum of Solace. Bond goes back to his roots and it feels like the perfect time to do so. We see James Bond as we haven’t seen him before, damaged, emotional and even vulnerable. His relationship with M, epitomised by the great Judi Dench, is explored further and some of the mysterious layers of 007 are revealed.

From an energetic, stunt filled opening chase sequence you know Bond is back and that we are in for a great time. Following the less than perfect mission in Turnkey resulting in Bond being presumed dead he later resurfaces after a new supervillian has attacked MI6 HQ. James travels to Shanghai and Macau and tracks down the fabulously evil lunatic that is Silva, Javier Bardem. This quirky blonde oddball saunters into a deserted warehouse where Bond is being held and gives the most superbly creepy introductory speech. 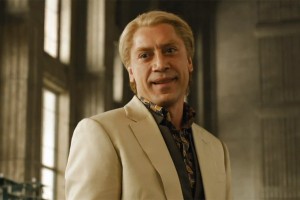 If you judge a Bond film by anything the quality of the villain has got to be a good place to start and Javier produces a brilliantly modern version of the classics that went before him. Silva is seeking good old fashioned revenge and he has a suitably disturbing back story giving him layers of subtext to play with. There is a definite Hannibal Lecter moment as he shares his smug intelligence while being held captive. He manages to be both threatening and witty in a clever portrayal of a madman.

The majority of the rest of the action in the film takes place in the UK making it feel like the most British Bond in a while. Introducing  the new and very young computer nerd Q, Ben Wishaw, at The National Gallery and reporting to MI6 in a Winston Churchill bunker under the supervision of another new face, intelligence co-ordinator Gareth Mallory played by Ralph Fiennes. 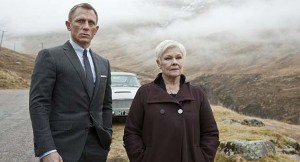 Judi Dench is back as M

James Bond’s relationship with M is also explored in much more depth in this film exposing human sides to both the characters. M has a much broader remit in this film so one really feels that Dench has made the most of her 007 experience.

I think it goes without saying that Daniel Craig is excellent casting as the spy and he excels in this film as he’s given the chance to play a more solid version of Bond. He gives the audience witty one liners, a few bond girl embraces, fantastic flirtation with Eve played by Naomie Harris, plenty of action and even explores his own history.

This really felt like a celebration of the character and one that resonates strongly, as it did in Casino Royal, with the Bond we know from Ian Fleming’s books. It is in the exchanges between James, M and Silva that for me make this the most honest and loyal Bond film I’ve seen.

Sam Mendes’s direction is spot on with clear action sequences, tense character exchanges and scenes that seem iconic as soon as you’ve watched them. It keeps a patriotic British feel as a nod to the anniversary and proves that this franchise has legs for many years to come.

I had read that this was the best Bond ever, well it is! It has everything a Bond fan will be looking for and the perfect recipe to introduce anyone dipping their toes in for the first time. It felt like a reboot of the reboot and all the actors feel rightly placed and perfectly cast.

Sam Mendes has injected Bond back into 007 with this excellently dark and stylish addition to the franchise.