Before Fifty Shades there was Twilight, the vampire love story that gripped it’s readers and later movie goers too.

For some this is the most exciting cinema release of the year, for others it’s a blip on the schedules they hope to ignore.

The Twilight Saga: Breaking Dawn Part 2 is the final film in the hugely successful vampire franchise based on the best selling novels by Stephenie Meyer. The story of Bella and Edward has been the obsession of many a teenage girl, and indeed fully grown women, since 2005.  The stars Kristen Stewart, Robert Pattinson, and Taylor Lautner are reunited for this final sendoff.

The final film picks up where the last left off with Bella fully transformed in to a ‘newborn’ vampire. Faced with super strength and a new found thirst Bella takes some brief tutorials on being a blood sucker from verteren vampire and husband Edward. Once reunited with her daughter and presented with new a love nest everything seems just peachy, even with her best friend and part time wolf Jacob having ‘inprinted’ on her baby. However the course of undead love never did run smooth and it’s not long until the Cullens need to seek help from their extended vamp family as young  Renesmee is at risk from the vampire Mafia Volturi, who believe her to be an ‘immortal child’. 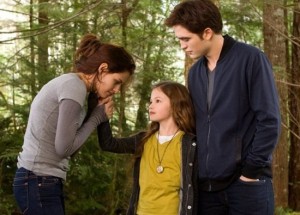 Where do I start! I have read and enjoyed the books and I really enjoyed the first film which I felt hit the spot. It was moody, had teenage angst and really epitomised the sexually tension of those formative years. Little touches like the nod to that apple art work and glum lighting made it a fun film even for non fans. Director Catherine Hardwicke got it right but I’m afraid the others just lost the innocence and magic of the first film. There was a glimpse of improvement with the ‘newborn army’ of Eclipse but other than that just generally disappointing in a downward spiral kind of way! Crimes include bright lighting, bad CGI wolves, cheesy lines, more CGI but on babies this time and a loss of characterisation.

I am sad to report that this final instalment did nothing to win me over and director Bill Condon has not revived it to it’s former glory. Bella’s transformation is as expected, she’s has a vampy makeover, but she failed to convey the emotions you would expect of a new mother/new vampire. I felt that the chemistry between Edward and Bella has well and truly left the screen and the other Cullens seemed as lifeless as their leftover dinner carcasses. Martin Sheen injects some energy as Aro and Dakota Fanning is menacing as Jane but it makes no allowances for those not up on the story.

That said the hard core ‘Twihards’ in the audience loved it whooping and cheering throughout. I strongly believe that only fans are going to watch this film therefore it may just keep them happy. However a crying wolf falling in to a crevasse in slow motion really was too much for me.

Fans will love getting an eyeful of the bare chested Jacob, enjoy some lovey dovey Bella Edward moments and coo at a cute and magical Renesmee as well as getting their fair share of some much needed vampire/wolf coalition battle against the Volturi.

I am certain this film will be a success with its target audience but it is sad to see the end of a franchise that had so much potential fall so short. Reboot anyone??