Tell Me on a Sunday is a one women musical with music by Andrew Lloyd Webber and lyrics by Don Black, currently being performed by New Zealand pop singer Carly Binding at the Q Theatre in Auckland.

Carly Binding is probably best known as a singer songwriter with this performance of the one act,  23 song show being her debut in musical theatre. This sits well with Carly who has a beautiful voice that complements these well known Lloyd Webber melodies.

The songs tell a story of a young English women’s life in the US and her search for true love. She tells us of her fare share of romantic failures taking her from New York to LA and finally back to Manhattan while reporting back to ‘Mum’ with the latest. 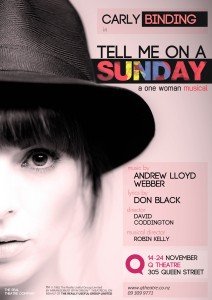 Carly definitely has the right look and feel for this part, an enthusiastic young women just seeking happiness. She displayed great maturity on stage and expressed the right level of emotion in what felt to be a very honest performance.

This part isn’t just about singing, and we know Carly can sing, but it’s telling a story with a pretty blank canvas on stage. With minimal set and only a few costume changes to switch songs and scenes this show relies on its star and she won’t let you down. She should be proud of this show as she displays her broad scope as a performer and is a personality I think audiences will love.

To the side of the main performance area, and sharing the stage with Carly, sat three backing singers and a live band. It was refreshing to see the band on stage, who played and sang superbly. These are well known songs but if you are not familiar with them then it’s great to get to hear them performed with live instruments, guaranteed you will be humming the songs afterwards!

If you love musical theatre you can’t go wrong with this one.

Tell Me On A Sunday runs until the 24 November.