The national Theatre of Great Britain and Global Creatures announced yesterday that they are proud to present the multi Tony and Olivier Award winning production War Horse right here in New Zealand.

Premiering in London in 2007 War horse isn’t short of awards and has been seen by 2.4 million world wide. Yesterday afternoon I found out why! 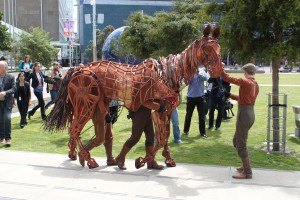 The star of the show is Joey the Horse and he made a special appearance trotting around Aotea Square, much to the delight of the lunch time crowd. The glorious sunshine was the perfect backdrop for this truly wonderful creature. Even up close it’s hard to see this as a puppet and not a living thing, he is just so perfectly animated and has a personality all of his own.

This stage production adapted from Michael Morpurgo’s book has also since been turned in to a blockbusting film by none other than Steven Spielberg! It tells the tear jerking story of Albert and his beloved horse Joey who is sold off to the cavalry at the start of World War I. We then follow him on his extraordinary journey through occupied France while forever hopeful that his bond with Albert will never be forgotten. Will Joey find his way home?? 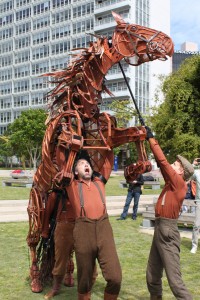 “War Horse is a life affirming story about friendship  courage and family, which appeals to all ages.”

“The ANZAC spirit is deeply entrenched in the Australian and New Zealand ethos. We expect War Horse to have a great resonance in both countries not only because of our connection to World War I but because themes of the land, loss and ultimate triumph of friendship have a special place in he public’s psyche.” 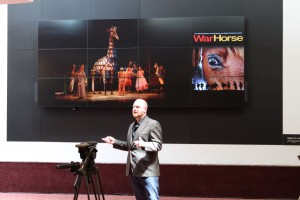 Finn Caldwell told us about the history of ‘Joey’ PHOTO: Ian Wright

Finn Caldwell, Associate Puppetry Director for War Horse spoke at the launch of how this little know book has become such a huge international success both in theatre and film. It was fascinating to hear how Joey has evolved through the direction and design of the Handspring Puppet Company.

So when and where I hear you cry!!

Well War Horse will be galloping to Auckland’s ASB Theatre from 20 August 2013 for a 4 week season. Tickets go on sale 23 November, so don’t miss the chance to see this truly breathtaking piece of theatre!

To see all our pics from meeting Joey check them out on our Facebook Page.