It’s undeniable that New Zealand has become quite the melting pot of cultures.  Consequently the definition of race and ideas surrounding ethnicity have evolved and become more ambiguous.

Chop/Stick, presented by Chairman Meow Productions and directed by Sophie Roberts, is a cheeky and irreverent social commentary which explores the ideas surrounding identity and that notion of “otherness” in today’s culturally diverse society.  This theme is emphasized even further by using just one actress to play thirteen different characters from various ethnic backgrounds.

The play challenges you to suspend your prejudices and proves that a skilled and talented performer can take on any character – male, female, Asian or “Other” – if given the chance.  Michelle Ang (Outrageous Fortune, My Wedding and Other Secrets) effortlessly and convincingly plays the collection of characters that appear in the story.  A Chinese grandmother, a Samoan teenager, a Caucasian guy from Pukekohe, a Japanese exchange student – she does them all. 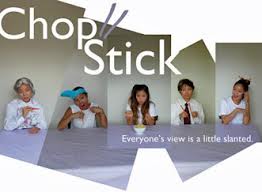 Michelle’s performance of these characters is truly remarkable.  She portrays and switches between the characters seamlessly; the distinct change in posture, body language and even cutlery is done fluidly and her command of the different accents is flawless.  The white sheer “curtains” that frame the stage act as walls and mirrors also aid in the transitioning between the different personalities.

The narrative is brilliantly conceived by Jo Holsted with many funny and entertaining moments but yet is also not afraid to delve into some home truths and the discrimination that does exist.  It consists of several interweaving storylines that is peppered with many stereotypes commonly associated with Asian culture.

I thought the date between Steve and Melissa at a typical “practical Chinese restaurant” – complete with plastic table covers, disinterested waitress and late night karaoke – was not only scarily accurate but I felt was the pivotal moment in the play.  It really was a very cleverly crafted scene which demonstrated that how we see ourselves and each other is subjective.

It really is a shame that the season is such a short one as Chop/Stick is an extremely relevant and thought-provoking play that everyone should see.  It will speak to those who identify with being taken only at face value and will hopefully provide some valuable insight to those who have taken it for granted.

See the final performances at The Basement Theatre!