The almighty lineup of reggae musicians that will descend on Rotorua for the 6th annual RAGGAMUFFIN festival in February has been announced today.

Today RAGGAMUFFIN has announced that joining the all-star lineup of artists who have already been revealed – including MS LAURYN HILL – will be legends of ska and reggae, TOOTS AND THE MAYTALS. They have been hugely influential to other musicians including having their song Pressure Drop covered by The Clash on their debut album and Monkey Man became one of the signature songs of the UK ska revival in the 80s thanks to The Specialscover. In recent years Monkey Man was covered by Amy Winehouse and most recently by No Doubt on the 2005 Grammy award winning album, True Love.

The familiar face of UB40 frontman and NZ’s Got Talent judge, Ali Campbell, returns to remind us of that legendary voice that sang Red Red Wine, Kingston Town, If It Happens Again and I Cant Help Falling In Love which sold over 70 million records worldwide. 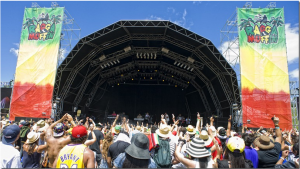 Also announced are REBELUTION – the mega Cali-reggae / roots four-piece band whose latest album Piece of Mind has had great US chart success, and DARKY ROOTS, a Brisbane-based outfit who are impressing audiences all around the pacific with a diverse repertoire of music, sweet harmonies, vintage horn section and heavy drum and bass.

Don’t worry the great Kiwi artists are represented too including this year’s Tui winners for Best Roots Album, THE BLACK SEEDS, who will headline the Friday night and eternal faves THREE HOUSES DOWN.

With more internationals than ever before, mixed in with the best homegrown talent, festival-goers will be guaranteed a mind blowing festival experience. Specially priced ‘subscriber’ tickets are now available until Friday 30 November. Earlybird Tickets will be available from 1 December until Christmas Day.