The short skirts, cleavage and hormones where rife for this well known comic and actor, who is as famous for his private life and love of the ‘over 18 adult female’ as he is for his brilliant comedy.

It was a different kind of atmosphere for a comedy gig but one that was bursting with anticipation. The show was started by Russell’s poet laureate from his BBC Radio 2 days, Greg “Mr Gee” Sekweyama. I always feel it’s really tough to be a warm up but Mr Gee was intelligent, funny, thoughtful, obviously poetic and quite a film critic, as he discussed the latest Bond and Twilight movies hilariously. It’s great that Brand has such a close and talented team around him and Mr Gee could certainly hold his own on stage.

Russell was introduced to the stage via a video featuring clips from interviews, news reports and his Willy Wonka rendition of I Am The Walrus at the London Olympics. He sauntered on stage to the sound of cheers and screams erupting from the crowd, and a couple of breast popped out too!

Russell gets right amongst it, he walked around the crowd as young women sprinted up to him, took photos, threw underwear and really seemed to have a case of Brandmania, leaving him feeling ‘like pacman!’ along the aisles of the arena. Not your average heckling.

As a fan I’ve seen Russell do stand up before, followed his career on TV in the UK and watched his recent success in the movies. However he is just born to be on stage. A natural extrovert and self confessed ‘mentally ill person who craves attention’ he has the perfect balance of outrageous and hilarious. His material covered his Olympic glory to sharing a joke with the Dalai Lama and not forgetting his blush educing jaunt into sexual techniques. Don’t underestimate him though, as he  cleverly leads you into sociological and philosophical material covering the power of corporations and religious beliefs. All the while he maintains the laughs and leaves you with a fresh perspective on those drink slogans.

There are some photos and projections on stage but really it’s just him being very very funny. Not many comedians can perform to such a large crowd just like they would in a comedy club but he does it and with ease. He thrives on the silliness and ridiculousness of it all but well and truly deserves the success he has. He even managed a poke at Paul Henry, hooray! 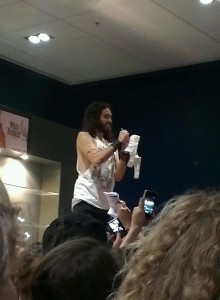 Russell will be back in New Zealand for a show at Wellington’s TSB Bank Arena 13 December, so if you want to see this true stand up star, who is definately more than ‘a walrus’ now’s your chance!