How far would you go for love?  Would you travel to the edge of the world for a chance at happiness?

Originally conceived as a short play for Silo Theatre back in 2003, Where Are You My Only One? is a moving and charming love story masterfully crafted by siblings Vanessa and Cameron Rhodes.  It is not your regular romance ridden with the usual clichés and cheesy lines, rather it is an intimate exploration into the lives of two people who are worlds apart in more ways than one but yet find a way to connect.

Yulia is a solo mother in Moscow craving a better life for herself and her family.  Bob is a lonely Waikato dairy farmer looking for a partner.  They meet by way of a “mail order” bride agency and through their mutual longing for companionship and love, they forge an unlikely bond. 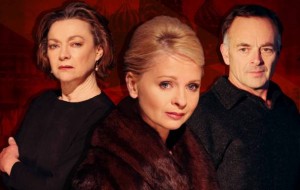 The struggles they encounter due to the physical and cultural divide really added authenticity to the story.  As their relationship blossoms and grows, the reality of their situation becomes more apparent.  Yulia wrestles between being loyal to her family and honouring tradition while Bob’s insecurities begin to unravel in dreamlike sequences which take form mostly in the form of a lively Russian dance performed enthusiastically by the three actors.

The narrative relies heavily on the performers making an emotional connection with the audience and I thought the cast delivered exceptionally on this front.  You are drawn in to the world of these characters and you quickly get to know them as if they were your friends.

David Aston is instantly likeable as the quintessential laidback Kiwi; he pulled off the awkwardness and “farmer humour” to perfection.  I was blown away by Elena Stejko’s passionate performance as Yulia – the raw emotion she conveys is captivating and truly remarkable.  Elizabeth Hawthorne was just a delight to watch; she brought great heart and comedy in her portrayal of the over-bearing mother.

Equally commendable is the set, lighting and music design which come together harmoniously thanks to the collaborative efforts of John Verryt, Bonnie Burrill and Stacey Donaldson.  I thought it was a brilliant idea having the audience on either side of the performance space and the two worlds represented on opposite ends of the stage.  This, along with the shifting spot lights and the very aptly selected score, really helped further accentuate the divide faced by Yulia and Bob.

This production boasts a stellar cast and fantastic creative team so will not disappoint.  Entertaining and rich with profound messages of life, this story will tickle your funny bone and tug at your heart strings.

Where Are You My Only One? is on at Basement Theater until 8 December.