Earlier this week, the magical Wintergarden at the Civic played host to the annual Hackman Theatre Awards.  In its fourth year, this event presented in association with STAMP at The EDGE celebrates the industry by poking fun at our key players and looking back at the highs and lows of the theatrical year.

The dress theme was “1990s – The Golden Years” so it was a flurry of colour, denim and pop icons as everyone in the Auckland theatre community arrived in their 90s best.  The evening’s very apt playlist brought me back to my teenage years and what better way to kick the night off with a bunch of Sister Act nuns singing Oh, Maria? 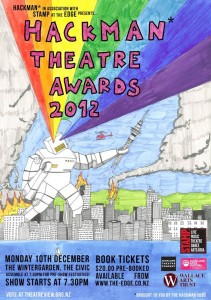 It was truly a fun and fabulous evening of revisiting and reflecting on the year’s theatrical productions.  Hosts Nic Sampson and Joseph Moore did an excellent job keeping the crowd entertained from a hilarious group number with Jennifer Ward-Lealand to getting the local drama schools’ competitive juices flowing with the inaugural “Act Off”.

It may not have the prestige and “official status” of the Oscars or the Grammys but I thought it represented the theatre community perfectly and Aucklanders in general.  I thoroughly enjoyed the laughs, the mayhem and elements of satire that were generously peppered throughout the night.

Congratulations to all the nominees and winners and to everyone that made the Hackmans possible.  Bring on 2013! 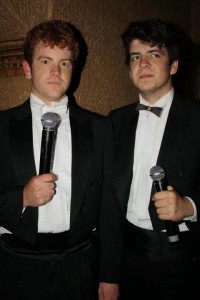 The hosts of The Hackman’s Nic Sampson and Joseph Moore

The Armstrong Creative Award for Best Technical F**k up of the Year
Jen Lal – for being amazing
The potting mix incident – Death of a Salesman
Gunshot going off too early – Punk Rock
The bed that wouldn’t slot back into the set, and then later clonked, the lead actor on the head – Bucket Boy  [WINNER]

The Playmarket Award for Best Line in a Kiwi Play
“I can’t die yet I’m only up to season three of The Wire” – Eli Kent, Black Confetti
“Fuck you New Zealand” – Jamie McCaskill, Manawa [WINNER]
“33 the same age as Jesus was when he was 33” – Stephen Papps, Third Person Tense

The THEATREVIEW Award for Best Review Quote of the Year
“I’m being blinded by the light reflecting off the nipple tassles” – Sarah Idle, Gather and Hunt (The Wunderbar Spectacular)
“The quick pit stop at the Ladies was almost a revelation. Everything was pristine clean and fresh as a daisy.  The usher was sweet and the theatre, to be frank, the most pleasant surprise I’ve had in a performance space for a long time. There was no hint of the old dust and grime; the smell of fresh paint sat lightly in the air, the walls were gleaming from a spanking new paint job and the whole place looked delightfully revamped.” – Lexie Matheson, Theatreview (Eigengrau) [WINNER]
“I can’t say I slept very well, being a man of above average height, having to curl myself to fit.” – James Wenley, Theatre Scenes (Sleepover)

The JAMES WALLACE ARTS TRUST AWARD for the fastest pack in/pack out by a production team of the Year
The Sex Show – Brad Gledhill and Co.
Nuclear Family – Ruby Reihana-Wilson and Co.
The Big Rethink Team
Ruby Reihana-Wilson for every show she’s done this year [WINNER]

The STAMP at The EDGE Best Newcomer Awards