By early evening the Cactus Stage could have been renamed A Place to Bury Guitars. There was violence in the air as the guitar-hurling three-piece A Place to Bury Strangers took to the stage like hyperactive psycho-weasels and tore through a memorable set of noise-rock.

I stumbled upon this act a couple of songs into their set and immediately saw that Dion Lunadon (ex D4) had butterflied his bass guitar. This for me was a first. Not for them I supposed. As the New York based trio increased in intensity, so did their willingness to test the durability of their instruments. Guitar lovers and soundies alike winced when both Dion and vox/ gat man Oliver Ackerman repeatedly dropped, threw and wielded their axes like skinny Vikings on really strong acid. 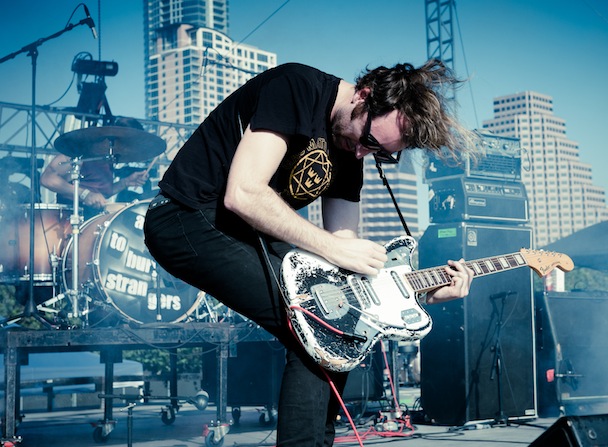 The irony was fairly heavy considering that, in backdrop of this spectacle, sat the prized possessions of Westhaven Marina and their iconic overseer the Auckland Harbour Bridge. With all that mayhem and destruction I was sure that, with the right kind of stimulating rhetoric, some gnarly riots could be had aboard some stolen super-yachts. But alas, even these piratical, unruly bastards must adhere to a 45 minute time limit.

Although impressed by their enormous stage presence I at times got scared of the piercing, reverb laden guitar and felt it compromised the mix too often. However, sound issues diminished in significance as their sound was filthy good and the band was delightfully unpredictable. Laneway seems a festival for virgin experiences and this one in particular would have people hurt in a strange but welcome way.

Guitar bands seized the day and it put a smile on my face, Japandriods were to follow on the Cactus stage. I needed a breather, a beer and something for the nausea. Keep an ear out for A Place to Bury Strangers but be prepared to bleed.