Playing for five nights from the 13-17 February, this sold out ‘rom-trage’ constructs an exciting and contemporary prologue to the original Swan Lake tale.

Swan Song is created by the ensemble of Kiwi talent, Wet Hot Beauties, and is a follow up ballet from Sirens, the troops 2011 sell out success. 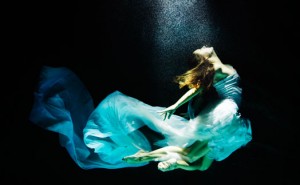 Under the cover of night Swan Song kicks off and brings the usually deserted pools to life with bright, ‘club’ style lighting. Glow sticks are handed out as entry wrist bands which illuminate the audience’s wrists.

Swim suit clad ‘swans’ laze and canoodle in bevies as the audience, entranced by the spectacle, breathe in the chlorine rich air. While Swan Song’s boisterous soundtrack lines up tunes from generation now, which subtly accentuate the story line.

The raw physicality of the human form comes to life as themes of tenderness and aggression are played out through the performance. The crowed coo and honk, totally engaged and delighted by the trails of water which splash up at their feet. The choreography is superb and highlights hilarious comedic situations, then moves on to hauntingly describe an emotional character defeat.

As the crowd dispatches to their cars I recall a moment. While slipping around the pools edge to our seats, an usher wearing a rash suit whispered “Don’t feed the swans, they’re allergic to everything.” and perhaps he was right for by the end of the tale it became apparent, swans are unquestionably allergic to love.

Check out the show this weekend!