Opening on the day of the first Gay Pride Parade in Auckland for 12 years was the perfect start for the run of Black Faggot at The Basement Theatre.

As the title would suggest this is a in your face, no holds barred proud expression of gay life in and out of the closet, told from the perspective of New Zealand’s gay islander men.

A set stripped bare brings these voices to life by two wonderful actors Iaheto Ah Hi and Beulah Koale. This incredibly personal space confronts you head on with the lives of these individuals. 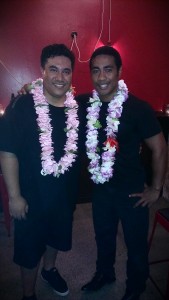 From ‘undercover brother’ James who is struggling to come out, terrified Christian who  hopes to ‘pray away the gay’ to  the island mama dealing with her son’s coming out.  They all have their powerful story to tell and through many short scenes we learn a little more about each character.

Black Faggot is utterly hilarious, and it’s pretty much all out laughs for the first 20 minutes. When the pace does change it’s a welcome and necessary encounter with the time before coming out or accepting one’s own sexuality. The prejudice around being gay and the Samoan and island community it dealt with honestly and provocatively but allows for the love, tolerance and acceptance to shine through too.

The squished in audience laughed raucously troughout but were quickly silenced in the more powerful moments. These touching and emotive scenes really showed the actors range and extraordinary ability to go from out and out comedy to intense sorrow.

The powerful script is perfectly balanced and complemented by the subtle direction from Roy Ward.

Ending in a much deserved standing ovation there was a tremendous amount of emotion in the room, and many expressed their thanks to these two powerful performers.

Black Faggot is a perfectly provocative piece which will have you aching from laughter and emotion in equal measure. A definite must see of this years Fringe line-up!

It’s sure to sell out so get in quick as it only performs until 20 February!