This week the full programme of the NZ International Comedy Festival 2013 was released and in celebration we were treated to one hell of  a showcase introducing this years Billy T nominees at Billy T James, Q Theatre. Rose Matafeo , Eli Matthewson, Pax, Tom Furniss and Joseph Moore each gave us a ten minute peek of their upcoming shows.

New Zealand Comedy Trust created the annual Billy T Award to support up-and-coming comedians and take their comedy career to the next level.

These final five nominees for the 2013 Billy T Award were selected on their proven comedic ability, talent, dedication, current form and potential, and will be judged on all aspects of their 2013 NZ International Comedy Festival show.

The night was hosted by Steve Wrigley and Ben Hurley whose well honed banter warmed up the audience and got us in the festival mood.

With the daunting task of being first up was Pax,  but this energetic comedian had brilliant material that made for a more than great start to the show. He’s a confident stand-up, and totally belongs behind a microphone as he confronted the audience with race, sex and uncontrollable accents!

Rose Matafeo brought a change in pace with her more understated brand of comedy. Even her crowd hype had an ‘anticlimax’ as she monotoned trough her self deprecating material. She is a bright funny stand-up and a great representative for young female comics and cat cardigans. 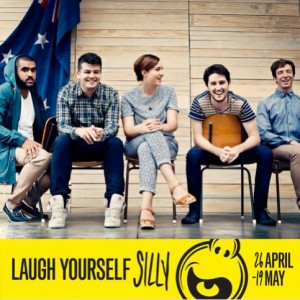 Tom Furniss finished up the second half by telling us that his good year has resulted in less material, leading him to read us the diary of 16 year old Gordon from 1984. This result is various boyhood stories culminating in the drawing lady parts. He’s a more surreal comedian with a clever set which may encourage some anarchic behaviour.

Starting the second half of the show was Joseph Moore who gave a slick and well rehearsed set with a hilarious insight to the effects of ‘that’ Countdown music. As an experienced actor and performer there was no hint of nerves in this polished performance. This will be Joseph’s first solo show where you can expect quick witted and silly observations.

Last up was Eli Mattewson, a butter wouldn’t melt looking guy with edgy material to make your mum blush. Fresh from a run at last years Edinburgh Fringe there’s a lot of buzz around him and he didn’t disappoint  He’s a strong performer who revelled in the audiences enthusiasm. His risqué material may have shocked more as it comes from such a sweet looking young man. A strong comedy talent who will no doubt have many more tricks up his sleeve.

To close off the evening was  last years Billy T Winner, the wonderful Guy Williams. He really is a treasure of New Zealand comedy who tackled the silly and surreal in his calm and collected routine. He seems well and truly ready to pass on the baton to the next rising star as he has definitely earned his stripes.

This was an evening to be proud of as these young comedians who have shown that the high quality of our up-and-coming comedy talent is not to be ignored!

Check out the full line up for the NZ International Comedy Festival which runs from 26 April – 19 May.