Billed as “a theatrical platter of short plays” Thali presented by Prayas Theatre will give you a taste of India beyond the usual Bollywood flair.  The program is presented very appropriately in the form of a restaurant menu and if that was not enough to wet your theatrical appetite, the pre-show buzz created by the cast themselves let you know that you were in for a rather festive night.

The meal kicks off with the main event, Balti Kings – I am unsure as to why the entrée did not come first.  This slice of life story which takes place behind-the-scenes in a failing family-run curry restaurant in Birmingham is the comedic centre of this delectable ensemble.    The kitchen hands are preparing for a “Curryoke” grand buffet (thirty-five dishes for the price of one!) and with Bollywood heartthrob Shahrukh Khan rumoured to attend, the pressure is on to make the night a success. 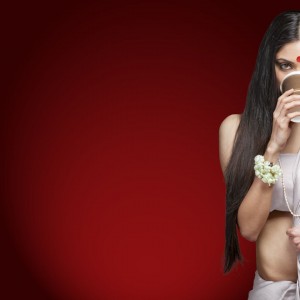 I felt the story dragged in some places and there could have been less entering and exiting the stage but that aside, this is very much a character-driven story and an entertaining one at that.  The personalities of the characters and their idiosyncrasies will definitely tickle your funny bone.  I particularly enjoyed the bossy head chef who is played brilliantly by Amit Ohdedar.

Through The Grapevine is the second play in the line up and was my personal favourite.  Ramayana and Mahabharata, two Indian mythological epics, are transported to modern day and we see what would happen if the two female leads Sita and Panchali were to meet in a cafe?  The twist: both characters are played by a single actor.  Monica Mahendru does this effortlessly, transitioning between the two seamlessly.

Things take to a slightly off-kilter path with the next short story, P James for President.  A magician and his two playful assistants come on to the stage and ask the question: who likes magic?  He then goes on to relate the story of his childhood.  I liked the storytelling quality to the narrative in particular the way in which the story was constructed and told collectively.  I especially liked the political undertones that were quite apparent throughout – clever touch.

A good meal should always end on a sweet note and in the case of Thali, the best was certainly left for the last.  My Name is Cine-ma is a fun parody of your common stereotypical Bollywood conventions.  Part monologue, part dance number the performance pokes fun at the archetype of the Indian heroine in a country that is the “dumping ground of film stock”.

Overall Thali is a mixed bag of treats which will tantalize your taste buds and leave you wanting more.  It is very different from what you would normally expect from a night out at the theatre but in a very good way.  Each piece is entertaining and refreshing in its own right and while they are culturally very specific, it is definitely universally enjoyable for all.

This show runs at TAPAC until 8 March as part of Auckland Fringe Festival.