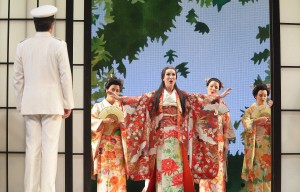 This emotional and tragic story by Giacomo Puccini is over 100 years old. A US Navy officer Benjamin Franklin Pinkerton likes a women in each port. In Nagasaki, Japan the innocent and trusting Butterfly (Cio-Cio San) becomes his wife. After only a short time together Pinkerton leaves his new bride who is now renounced by her family. However Butterfly’s love and loyalty means she refuses to accept that he will not return as three years pass waiting for “One Fine Day”. We learn that Butterfly has a child from Pinkerton. News that she hopes Sharpless, the American consul, will relay back to him. Unfortunately for Butterfly when he does return it is with his American wife. He is too much of a coward to see her again but wishes to take his son to America. In her total devastation Butterfly gives up her son and commits suicide saying she would rather die an honourable death than live a life of dishonour.

The NZ Opera’s production is a pure and beautiful experience that will not only please seasoned opera lovers but no doubt win over new ones.  A clever cubic set with sliding shoji doors allow for quick changes and facilitates some wonderful lighting effects. Overall there are few props. The lights, music, costume and voices provide the mood. A particular jaw dropper is the lantern scene as Pinkerton and Butterfly duet under the stars. All the while the  Auckland Philharmonia Orchestra divinely resonates around the now refurbished ASB Theatre.

Butterfly’s first entrance is totally breathtaking. Bringing with her bright colours, wonderful costume and the magically alluring female voices. The show belongs to Antoinette Holloran whose depth, voice and stage presence are second to none in this production. Going through an intense vocal and emotional journey I found her to be faultless. I was totally in awe of her performance. Supporting Butterfly throughout is the loyal Suzuki, Lucy Schaufer, who gives an excellent performance as the caring and desperate  housemaid who does everything she can to try and convince Butterfly that Pinkerton will not return. They share some touching and wonderfully stirring duets together. 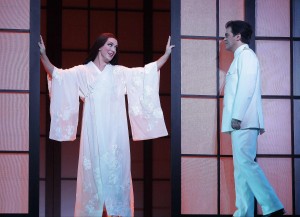 Pinkerton, played by Piero Pretti, takes a more understated role. A wonderful solo voice which is also perfectly complemented in duets with Butterfly. Again total perfection musically. A kinder male figure is found in Sharpless, the United States consul at Nagasaki, played by Peter Savidge. He projects caution, empathy, warmth and sensitivity in his performance.

Director Kate Cherry has created a slick production without losing any of the beauty and emotion of this classic piece of Opera. The eye catching art work promoting this production reflects its beauty perfectly.

NZ Opera’s Madame Butterfly is a show simply not to be missed. A world class masterpiece!

Madame Butterfly  will be in Auckland 18 – 28 April at ASB Theatre and in Wellington 11—18 May  at St James Theatre.