Jarred Christmas has got some moves!! With the most energetic entrance of the festival I was pretty sure we were in for a good night.

This returning Kiwi is now based in the UK so it’s a treat to see him in Auckland. He began with some fun audience interactions, including giving a guy in the front row about 12 nicknames.

Christmas uses the majority of the show as a Q&A session as he invites the audience to ask him anything. After a hesitant start we get into the flow with some clever and quick answers from our comedic host.

I love improvised comedy and this show structure means you will always get an original and bespoke performance. The topics he covered included his fashion style, TV shows, foot hygiene and heroics as well as Jarred giving some manly advice to an 18 year old. It appeared we had so much fun he forgot to ‘tell any jokes’. 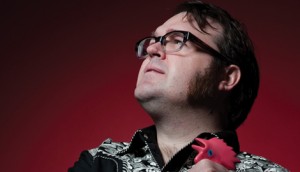 However Jarred weaves in his clever stand up when you feel like you’re just chatting. He has a love of HipHop, is an excellent dancer and can tell a romantic tale about his grandparents during WWII. Quite a repertoire! Rest assured he definitely has more than seven jokes.

I particularly loved his take on fatherhood and the fantastic story about a rather awkward close encounter with a dog. His HipHop passion comes out not only in his intro music but in a wonderfully witty rap lyric evaluation.

Jarred Christmas’s Let’s Go MoFo! shows just how much material he has in his head. This structure allows him to just unleash the funnies when prompted. He literally has an answer for everything! (and a great knowledge of WWII fighter planes).

Listen to Jarred on our Comedy Podcast!